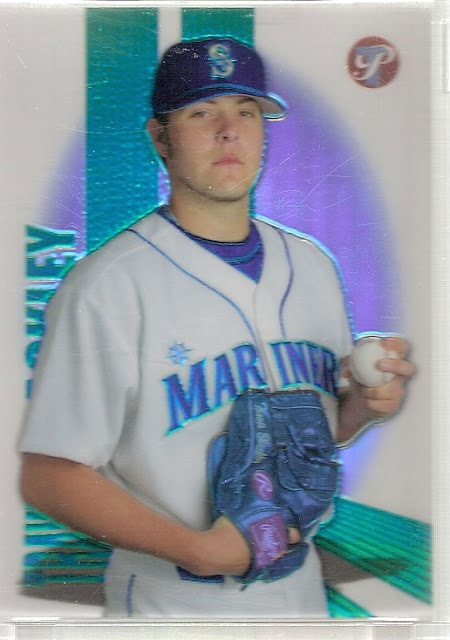 Front Design: A player image appears over a background containing his name and a 3D-styled track design.

Back Design: The backs contain a black and white photo, player name and position, prior-year and career statistics, vital stats, and a career biography, integrated with the same 3D track design from the front.

Distribution: Pristine was released in an interesting tri-pack configuration. Each tri-pack contains one uncirculated card - this could be a refractor or one of a number of low-numbered relic or autograph parallels. The regular refractors are most-likely pulls, though gold refractors appear one per box. Veteran refractors (cards 1-100) are serial numbered to 49. First year players were more complicated, each with three cards in the set. For instance, Howie Kendrick appears on cards 125 (common), 126 (uncommon), and 127 (rare). Refractors were limited based on the rarity of the card - common refractors numbered to 999, uncommon to 399, and rare to 49.

Thoughts: The Pristine sets came out at the height of the grading craze, and several Topps sets were released with "uncirculated" versions. In the end, the holders protect the card but for collectors who don't want holders it means sacrificing the integrity of the card. I've had cases where the stickers have partially come off, which would allow me to access the card and reseal the sticker. The set is one of the unremarkable upper-tier money makers that most collectors won't remember, and the common/uncommon/rare concept must have been developed to permit a large number of rookie cards to be included in packs while still providing a chance at rarity. I've never been excited about the Pristine concept or its design. 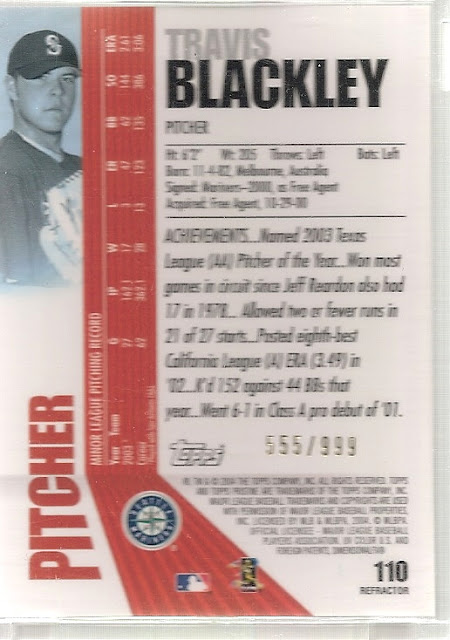