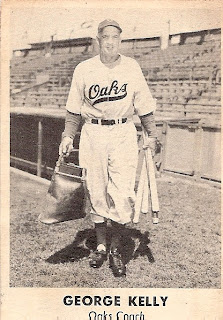 Set size: 27 cards, approximately 2" x 3"
Front Design: These cards follow the design of the previous Smiths issues (see 1947, 1948), and are identical to the 1949 Remar issue except for the records on the back. A black and white photo in a white border appears above the player's name and position.

Back Design: The backs contain statistics for the 1949 season, and an advertisement for Remar Bread, and the Oaks broadcast stations. "Let's Be Friends" is a Sunbeam Bread slogan.

Parallels and Similars: As mentioned above, all Remar Bread team set issues look nearly the same, as do the Smiths card issues of the same era. The white border does not occur until 1949.

Distribution: Cards were distributed once per week, most likely at games.

Thoughts: The consistent use of the same basic design over and over again can be monotonous, but minor league issues such as this didn't receive too much effort from the design department. I didn't realize until I started writing this post that George Kelly, here a coach, is a Hall of Famer and the key card of the set (and I got it for a steal, despite the condition). As a player in the early 1920s, he was the best, and without Babe Ruth he would have probably been the superstar of his day. He fell from the top after 1924, and is highly questionable as a member of the HOF. But this is a great addition to the Zoo!

Additional Links: George Kelly's Hall of Fame page lists his accomplishments. You can view images of all the cards in this set here. 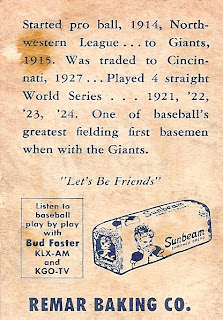