Yesterday was the first day since starting this blog that I missed a post. Oops. We're getting into the regular-sized-or-smaller cards now, and I ran out of scans. I'll have to tear myself away from other tasks to do that! 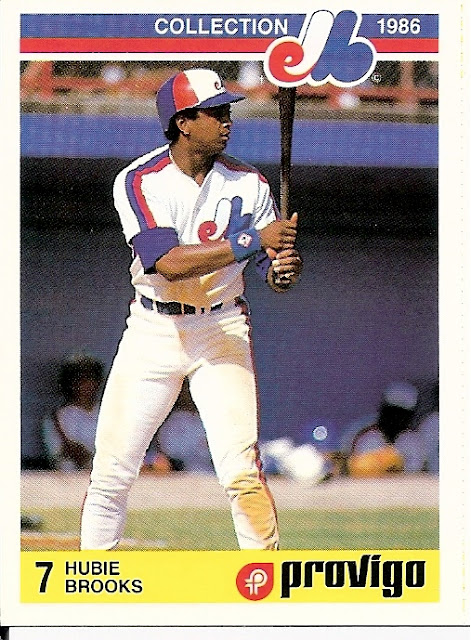 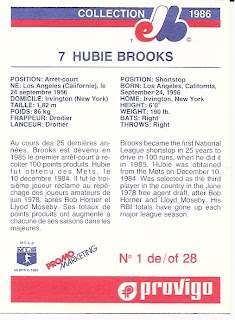 Front Design: A color photo is surrounded by a white border. The Expos logo and "Collection 1986" appear in an upper team-colored banner while the player's name and jersey number and the Provigo logo appears on a bottom yellow banner.

Back Design: The backs are printed in team colors, repeating the top border and bottom border (this time in red). The player's jersey number and name appears below the top banner, while most of the card is filled with the player's vital stats and biography in both French and English. The cards are numbered in the lower right.

Parallels and Similars: Despite the year markings indicating there were other similar sets, it doesn't appear that the Expose released standard-sized team sets in surrounding years. Provigo has issued other non-card Expos products in the 1980s, including posters in 1986.

Distribution: I can't find any information on how they were distributed, but it is my guess that they were given out at Provigo. The intact panels contain two cards plus an offer card (see below). An album was available, but required the cards to be separated.

Thoughts: As far as team sets go, this is fairly standard quality. They're not as good as Mothers Cookies cards from the era, but they're a bit better than the Police cards I've featured here so far. The photography and printing is above-average for its time period, but the card stock is thin - something necessary if you're tearing the cards, I suppose. It's fun seeing French writing on cards, but takes space away from the card's ability to provide either a larger biography, larger print, or statistics. I wonder (if Provigo still exists) if I could try to use the coupons. I'm not sure what I'd do with a 1986 Expos ticket today, but that coupon has no expiration date.

Additional Images: The entire set, in panel form (not necessarily in order):