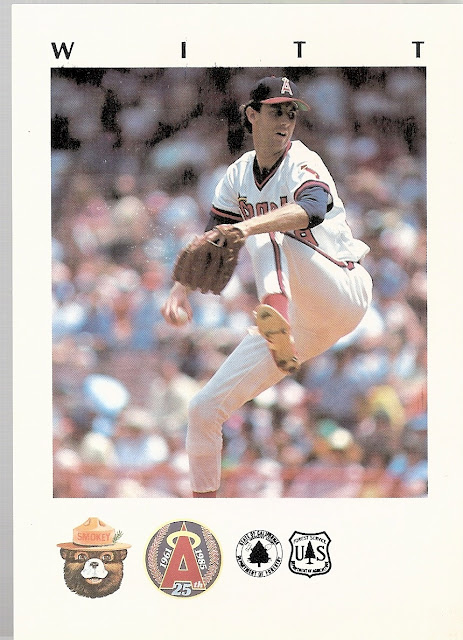 Front Design: A color player picture appears in the middle of the card surrounded by a large white border. The player's last name appears at the top, while the Smokey The Bear, Angels, California Forestry, and US Forest Service logos appear at the bottom.

Back Design: The black and white backs contain the player's name, position, and vital statistics, and an anti-wildfire message or graphic.

Parallels and Similars: None known, though from 1984-1997 there were over 125 Smokey sets released, any of which could have a similar layout. The Angels had Smokey sets from 1984-1991, with varying designs.

Distribution: Cards were given out at the July 14, 1985 game at the stadium.

Thoughts: The card photo didn't scan very well, due to low printing quality, but it isn't as bad as it looks. Being oversized and fairly generic in style (larger than but similar in design to police issues of the era), the set isn't very attractive except for player and team collections. I always enjoy the non-baseball content on cards like these, such as the cartoon on this card's back. The two bears are breaking a match in half, but I'm not sure why, because there's no explanation with the image. Perhaps it's to reduce the chance of it being lit by children, or if it becomes accidentally lit, it won't burn long enough to affect surrounding brush. I guess we'll never know without looking it up (something you couldn't do in 1985). 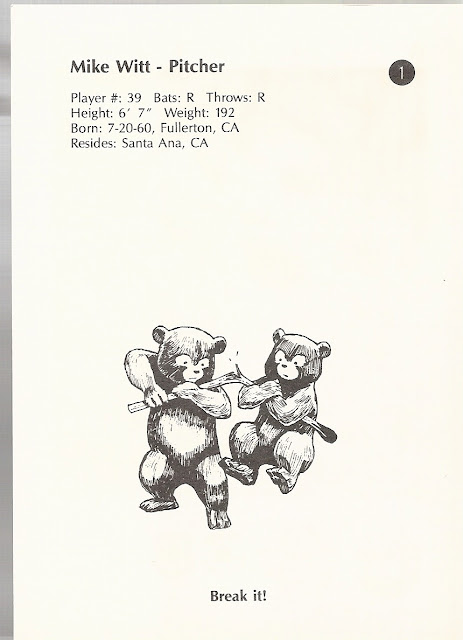