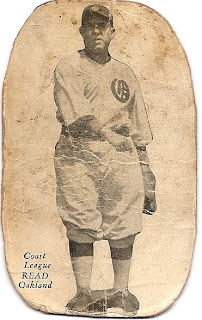 Front Design: A player photo fills the card front. Instead of "Coast League," the player's last name, and team city are on the front. Starting in 1931, the year of issue stopped appearing on the card, making it difficult to identify the year of issue without a coupon. Based on a limited number of scans examined, it seems that there are some text differences from year to year to help - 1932 cards seem to have this small type font instead of hand-written information, and only the player's name appears in all capital letters.

Back Design: Backs are blank.

Parallels and Similars: As mentioned above and in previous posts, Zeenuts cards are similar in design from year to year.

Distribution: Issued in San Francisco by the Collins-McCarthy Candy Co., the cards were inserted into boxes of Zeenuts, Ruf-Neks, and Home Run Kisses. Cards originally had coupons attached to the bottom, but it is tough to find intact issues.

Thoughts: This is the third Zeenuts card featured on this blog, and there are a few more I'll be showing this month. Addison Read played in for the Oakland Oaks in the Pacific Coast League for 12 seasons, mostly as catcher. It appears that is all he did in professional baseball - I don't see any additional statistics or information to indicate he was traded to other teams, moved up or down in the minors, or was promoted to the major leagues. While he didn't get much love, this card sure did. It was most likely rounded off and then pasted into an album by an owner.