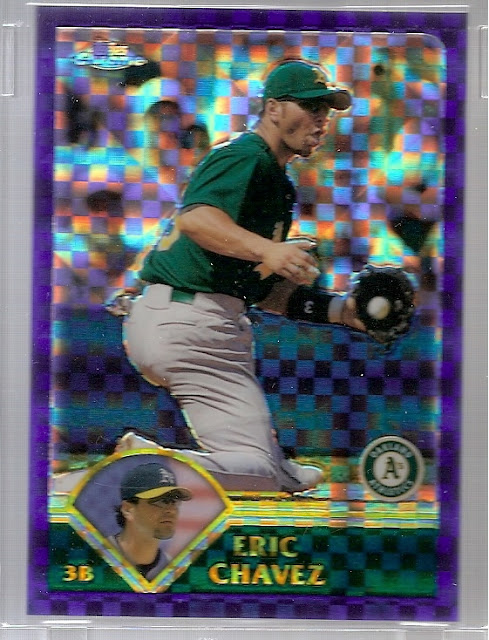 Front Design: Cards follow the 2003 Topps design, with a player photo surrounded by a blue border; the player's name, position and team logo appear at the bottom in a team color band. Also at the bottom is a baseball field-shaped smaller photo of the player. The card has received the x-fractor treatment, which is a checkered-pattern style of refractor. 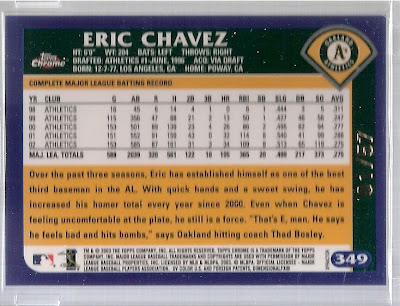 Back Design: Card backs are horizontal, containing the player's name and vital statistics at the top; the team logo appears in a baseball diamond in the upper right corner. The player's career statistics and a career biography (as space allows) fills up the bulk of the back. The card number and the word "XFRACTOR" appear in the bottom right. Uncirculated X-Fractors are serial-numbered to 50 (cards 1-220) or 57 (cards 221-440).

Parallels and Similars: These cards are parallels of the 2003 Topps Chrome set, and as such there are several other cards with the same design, with different colored borders and styles of refractors. Plus, the Chrome set is identical in design to the standard 2003 Topps flagship set and its parallels.

Distribution: Cards were inserted one per hobby box in 2003 Topps Chrome Series 1 and 2. The "uncirculated" part stems from the cards being packaged in a sealed hard holder.

Thoughts: The sealed card craze was big in the early-mid 2000s, stemming from the graded craze. Being uncirculated meant your card should be gem-mint upon receipt. I don't care for this concept, but I'm keeping the cards in their holders for authenticity-sake. The uncirculated concept certainly comes from the coin collecting community, but it reminds me of the 1990s cards issued with protective coatings (namely, Donruss/Leaf products followed by Topps products like Finest). The image is blurred because my scanned focuses on the glass, and the provided holder is thick enough to cause the image to be beyond the focus point.
Posted by Ryan G at 3:41 PM