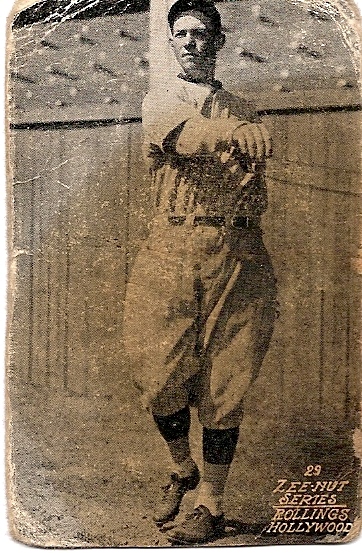 Front Design: A black and white portrait fills the entire card. "29 Zee-Nut Series," the player's last name, and team city are printed over the photo. A rare possibility is finding the card with a coupon attached to the bottom - these carry a large premium.

Back Design: Blank, as always.

Parallels and Similars: Most Zeenuts look similar to each other, except for the year of issue appearing on the card front for most sets. The 1927-29 series are the same, except for the two-digit year, though the 1929 issue is 1/8" taller.


Thoughts: Unlike the background of my 1927 Zeenuts Krug card, this one shows only a small part of what is most likely the Hollywood Stars' home stadium at the time, which would have been Wrigley Field, the same field as the Krug card.