I adjusted some of the colors on the template so the blog text is black on a lighter background. If you view this blog in the template (instead of through your own reader) and anything is difficult to read, let me know. Yesterday's black-text post was caused by crazy manipulation of the Blogger system while writing the post due to the connection issues the night before, but now all text should be black by default. 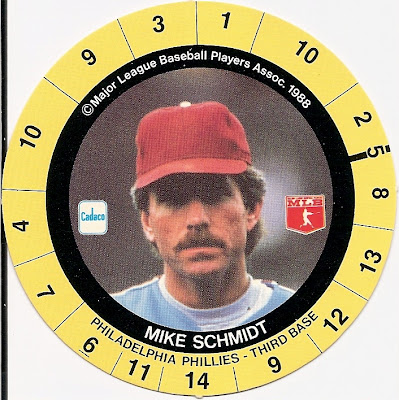 Front Design: An airbrushed color player photo appears in the center of the disc, surrounded by a black ring with the player's name. Team name and position are beneath the name in a yellow ring which also contains a series of numbers to be used in a game. There are several errors in the set; four were corrected and the error versions of those cards can hold a slight premium.

Back Design: The black-on-white backs contain up to five years of career stats and biographical information. The team name and league may or may not be listed on the back

Parallels and Similars: Future yearly issues of additional discs follow identical layouts, but can be distinguished by the last year of stats on the back of the card. Note that my 1989 disc has a copyright year of 1988; the statistics data is the best way to judge the issue year of this set. Cadaco games issued prior to the 1989 edition did not contain color photos.

Distribution: The discs were issued with and intended for use in a board game. The numbers on the front of the card correspond to the player's career statistical likelihood in various game situations. Complete board game sets are valued around $20.

Thoughts: Without context, the numbers on the front have no meaning. The backs are plain and as a stand-alone set these discs have no interest. I've never played a Cadaco game so I'm a bit interested in the meanings for all those numbers. As you can see in the hi-res scan, the image quality is somewhat low, but expected in a product like this (they're game pieces, not collectibles). 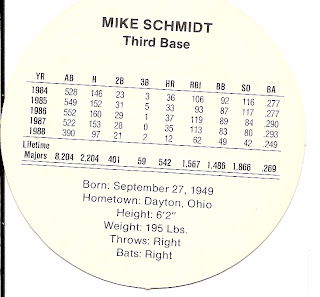