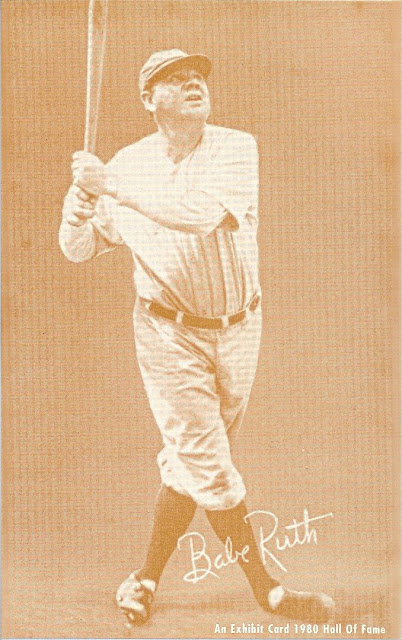 Front Design: The player's facsimile signature appears in white, in addition to "An Exhibit Card 1980 Hall Of Fame" to distinguish this issue from earlier issues using the same photos.

Parallels and Similars: As mentioned in yesterday's post, most Exhibits issues from 1921-1980 look the same, with minor printing text differences. This set is identified by the "Hall Of Fame" text at the bottom. The 2004 Leaf Exhibits insert set is standard-sized. An unauthorized reprint set of 16 cards exists, but wouldn't include these cards due to their low value.

Distribution: Complete sets were issued and sold to collectors printed in sepia (above), red, or blue ink.

Thoughts: This is the most accessible Exhibits set, valued at only $25. The selection of players in this set makes it a great way to collect several Hall of Famers on beautiful displayable cards at a low price.

Additional Links: Old Cardboard has basic information on all the Exhibits issues through the 1960s. Adam Warshaw's site looks at some of the more "Interesting Exhibit Cards" (his title not mine).
Posted by Ryan G at 2:49 PM