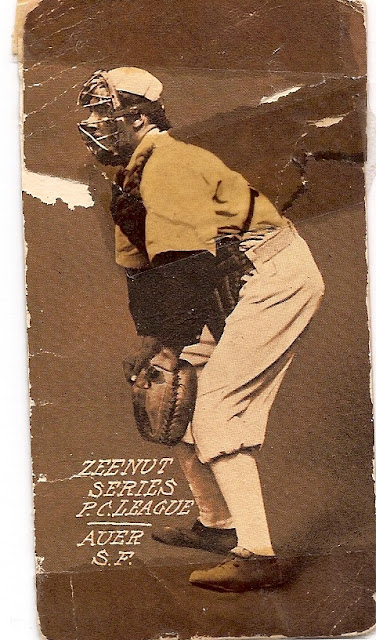 Front Design: A sepia player photo appears on a borderless brown background, with the player's last name and team, and "ZEENUT SERIES P.C.LEAGUE" in fancy handwritten lettering near the bottom.

Back Design: The backs are generally blank, though some contain advertising for Zeenut premiums, or a Bardell logo (see below).

Parallels and Similars: Zeenut cards follow similar designs, with small differences from year to year. There are counterfeits of this set.

Distribution: As with all Zeenut releases, these were inserted into Collins-McCarthy Candy Co. products, including Zeenuts, Ruf-Neks, and Home Run Kisses. Cards which were collected and redeemed for premiums received a hole-punch cancellation, usually heart-shaped (according to the SC guide).

Thoughts: I'm pretty sure my card is original, and it certainly appears to have received a lot of love over the past 100 years. It isn't my oldest card - I have two 1911 issues and a 1909 T-206 - but it's exciting knowing I have copies from some of the earliest major baseball card sets issued. This is the oldest card shown on this blog to date, by 15 years. My card contains the Bardell logo on the back, which you can see in the scan below. It was obviously taped into an album, and probably put into an album with those sticky photo pages. Was it taped into the album because it kept falling out, or as a precaution against it coming loose? Or was it moved from one album to another? Did some turn-of-the-century child tape this card to a wall at one point? Otto Auer appeared on only two cards in his lifetime, this one and another issue by the same company that year inserted into the Home Run Kisses boxes.

Additional Links: Old Cardboard's site contains information on the entire Zeenut run. Stars of the Diamond has several photos of cards from the Zeenut run, including the 1912 Home Run Kisses set. 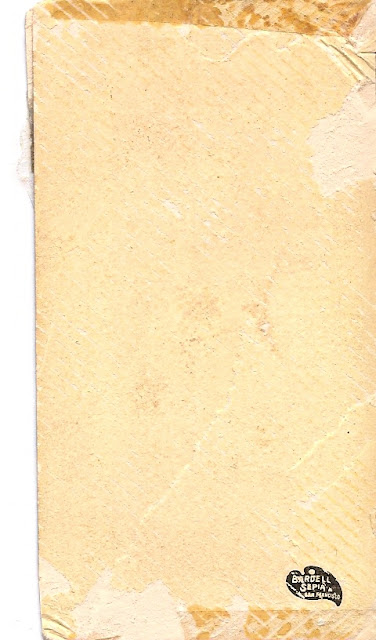