This is post number 50! I want to thank all of my readers (the approximately 20 of you per post), because without your continued interest, I probably wouldn't keep putting so much effort into these posts. Sets like this one can be written in about 10-15 minutes, because information is readily available. However, posts like the 2009 Fan Pak Standees and 1947 Smiths Oakland Oaks take much longer. In fact, the Fan Pak and 2009 Fatheads posts have taken the longest to write out of all of them, because there is no information on them in the SC and Beckett guides, and my information has to be gathered from web postings. Thankfully, company websites still exist to make some of it easier.
I know the 1990s/early 2000s stuff isn't the most exciting to many of you, but if nothing else it introduces you to many of the sets you probably missed while you were busy chasing women and alcoholic beverages. So we continue with this one! 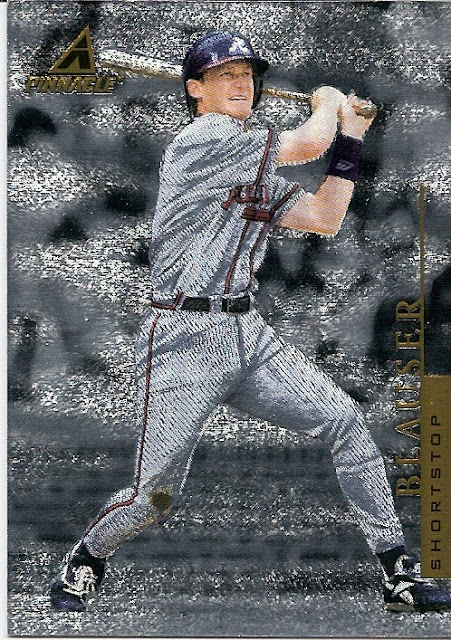 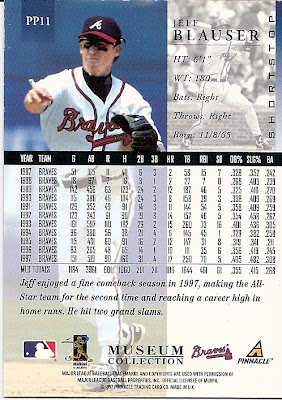 Front Design: Pinnacle applied their museum finish, an etched silver foil, to the base set in this partial parallel. The player's color photo appears in the etched format, while the Pinnacle logo appears in gold foil, as does the player's last name and position, turned sideways on the right-side border. There are several subsets in the Pinnacle set that were included in the Museum Collection set, including All-Star (shown), Rookie, Field of Vision, and Goin' Jake.

Back Design: The backs contain a PP-prefix card number over a different player photo in the upper-left; the player's name, vitals, and position appear over a black-and-white version of the front card photo in the upper left. The color photo continues, faded as a background, through career stats to the bottom of the card. Most cards contain a brief highlights biography beneath stats. The Museum Collection identification, team logo, and copyright logos and information fills the card bottom.

Parallels and Similars: This set is a partial parallel to the 200-card base Pinnacle set, and an Artist's Proof version with gold foil and a red Artist's Proof seal.

Distribution: Museum Collection cards were inserted into 1998 Pinnacle packs at a rate of one in nine packs.

Thoughts: The etched foil never really seemed to catch on. I didn't find it terribly attractive, because it took away from the high-quality photos and printing later-issue Pinnacle sets provided. It is best used in inserts. That said, these parallels provide something more to the parallel aspect than just extra gold foil stamping or different-colored borders. At only 100 cards, this isn't too difficult a parallel to complete, if you can find the cards at decent prices.
Posted by Ryan G at 3:41 PM