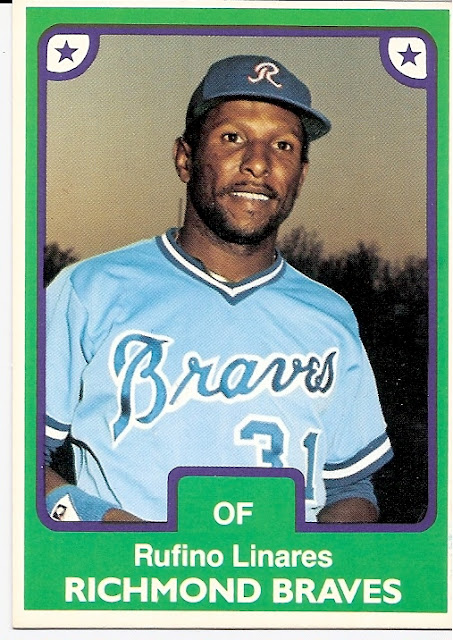 Front Design: The color photo is surrounded by a rounded purple border. Purple stars appear in the upper corners. A green border outlines the purple border and contains the player's name, position, and team in white letters at the bottom. 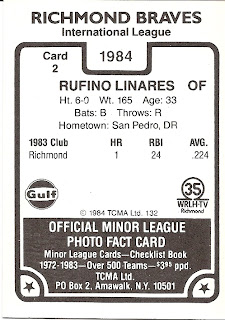 Back Design: The black-on-white backs contain the team and league names and year of issue at the top; a border similar to the purple front border surrounds the card number, player's name, position, vitals, and basic statistics. Sponsor logos and a TCMA advertisement fill the bottom half of the card.

Parallels and Similars: All 1984 TCMA minor league issues follow the same design, and most TCMA issues of the period have similar designs.

Distribution: TCMA sold their own sets, but it was also possible to find them at dealers and stadiums (especially sets with sponsors like this one). *Note: This actual card is most likely a reprint, possibly part of a sheet distributed with collectors kits in the mid-80s. However, the design is the same, except for the borders - note that in my card, the green border does not go to the edge; on original-issue TCMAs, the green reaches the edge.

Thoughts: Am I the only one who wishes he had one of those TCMA checklist books? $4 was a lot of money back then. I would like to see one! The cards themselves are fairly unimpressive, as most minor league sets are from the 1980s. By 1984, Rufino Linares was on his way out. He never found his place, despite hitting .298 in 1982. He would finish with the Angels in 1985, batting .256 in 18 games. He died in an automobile accident in 1998.
Posted by Ryan G at 4:43 PM