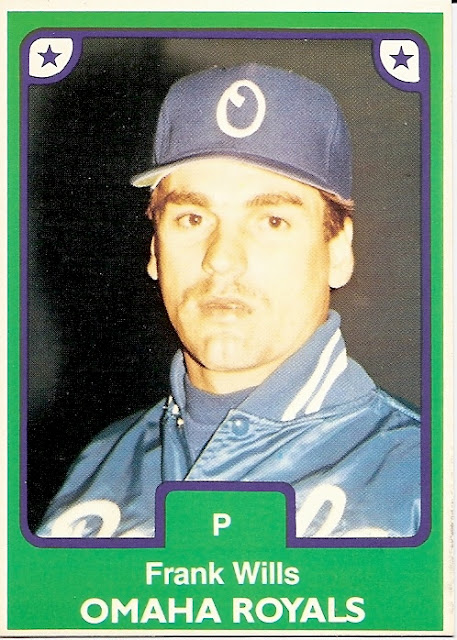 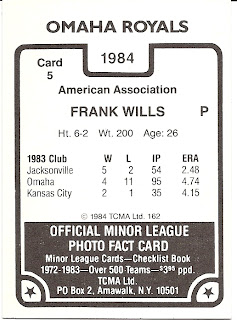 Front Design: A color photo sits in a purple frame with curved edges and stars in the upper corners. The player's name, position, and team appear at the bottom in an outer green frame.

Back Design: The black and white backs repeat the front border design, containing the team name and year, league, player's name and position, vitals, and some basic 1983 minor league statistics. The bottom 1/3 of the card contains a TCMA advertisement.

Distribution: Sets were sold by TCMA, and could have also been sold by dealers and the team. *Note: This actual card is most likely a reprint, possibly part of a sheet distributed with collectors kits in the mid-80s. However, the design is the same, except for the borders - note that in my card, the green border does not go to the edge; on original-issue TCMAs, the green reaches the edge.

Thoughts: Poor Frank Wills. He was probably walking through the tunnel, back to the clubhouse, after a tough outing (one of those 11 losses in Omaha the previous year), when a guy with a funny hat and a large, old camera approached him. "Hey, Frank, over here!" *bright flash of light* "Thanks!" Months later, his teammates saw his trading card and mocked him for the rest of the season. "I'll show them!" he said, and the joke was his when he snuck in as Danny Jackson in the 1985 Donruss set.

All fantasy revenge scenarios aside, the set design isn't bad, even if it doesn't stand out. Staring at hundreds of these cards at once would probably cause blindness, not unlike the great loss of eyesight that occurred as millions of collectors opened packs of 1991 Fleer. On it's own, as a team set, it works.
Posted by Ryan G at 3:00 AM