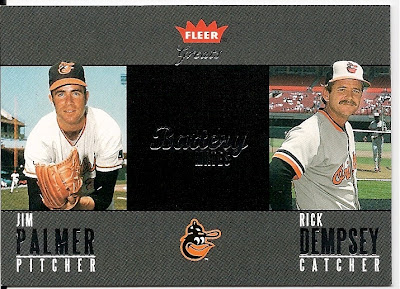 Front Design: A pitcher and catcher who were battery mates (hence the set name) are shown in photos on the left and right side of the horizontal card. The player's name and position appear beneath each photo with the team logo between the two. There is a large amount of empty space above and between the photos, which is partially filled by a Fleer Greats logo and "Battery Mates" centered on the card. 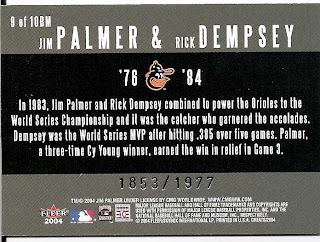 Back Design: The player's names are repeated in a banner at the top of the card, and the years they were battery mates are beneath the players' names. A highlight fills most of the card; the cards are serial numbered to a year during their combined career at the bottom.

Distribution: Cards were randomly inserted into packs of Fleer Greats. Cards are serial numbered between 1934 and 1979 depending on the years the two players were teammates.

Thoughts: I don't care much for cards with multiple players, most of the time. That is partly due to many of the pairings being based solely on the players both playing the same position, having similar statistics or comparisons, or being on the same team (see also: 2011 Topps Diamond Duos). Some multi-player cards get the pairings right, and this set is one of them (see also: ~1993 Upper Deck Teammates subsets solely for the logos, pairings, and generally interesting photos). On the other hand, the design is so basic and there is no real effort to pair the two images together with some pitcher-catcher theming. Something could have been done with all that empty space at the top. So while I applaud the concept, I disapprove of its execution.
Posted by Ryan G at 10:20 PM