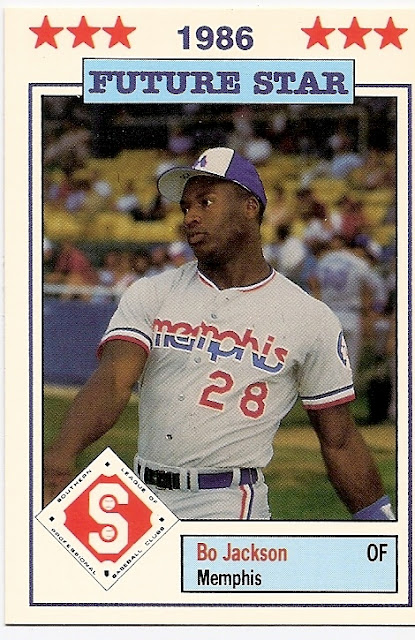 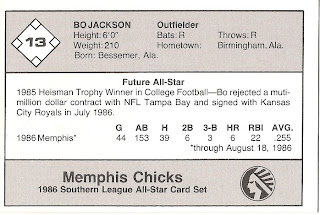 Front Design: The top of the vertical card proclaims this player a 1986 "Future Star" surrounded by six red stars (other words, such as MVP and All-Star are used on other players). A thin black border contains a color photo, the Southern League logo, and the player's name, team, and position.

Back Design: The horizontal backs contain player's vital stats, a short biographical note, 1986 season stats, and team name and logo and set-identifying information at the bottom.

Parallels and Similars: none known

Distribution: Cards were likely sold by Jennings through hobby dealers, and possibly in stadiums.

Thoughts: There's a lot of white space on these cards, but it features a design that's somewhat unique among minor league card sets. Canseco, McGwire, and Glavine are also in this set, but my SC guide lists it at only $9, which means it was probably produced in much greater quantities than normal team sets. The stats are accurate through August 18, 1986, which might have been the end of the season. It's very difficult to readily find information like this! If that is the case, the set may not have been sold in stadiums until 1987 if at all. However, the hobby network would have seen this set soon as it could be printed.
Posted by Ryan G at 4:30 PM