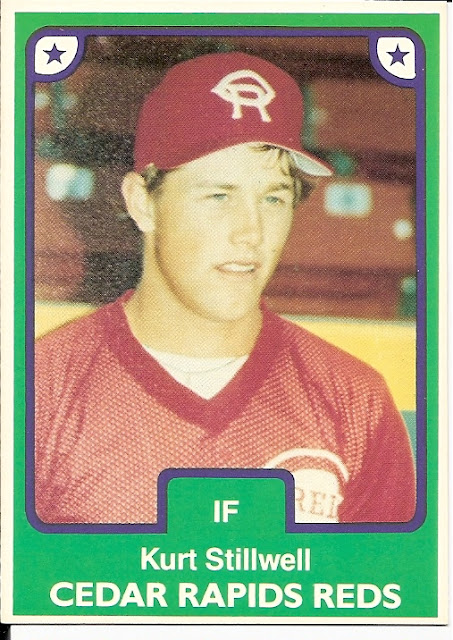 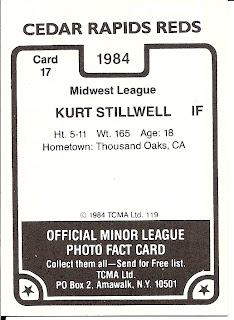 Front Design: A purple border with rounded edges surrounds a color portrait; stars appear in the upper corner. An outer green border includes the player's name, team, and position beneath the photo.

Back Design: The border is inverted on the black and white backs; the team name, year of issue, league, player name, position, vitals, and statistics fill most of the space. The bottom 1/3 of the card contains a TCMA advertisement.

Parallels and Similars: All 1984 TCMA sets have the same basic design. See my previous two posts for other TCMA 1984 issues.

Distribution: The cards could be purchased from dealers and usually from teams, as well as TCMA. *Note: This actual card is most likely a reprint, possibly part of a sheet distributed with collectors kits in the mid-80s. However, the design is the same, except for the borders - note that in my card, the green border does not go to the edge; on original-issue TCMAs, the green reaches the edge.

Thoughts: It seems like every new photo I see from these sets gets worse and worse. Kurt must have come straight from an audition for a part in one of those 1980s teen sex comedies - you know, airheaded girls in spandex and bikinis sleeping with unbelievably dumb jocks in incredibly short shorts with brains smaller than the walnuts between their legs. I want to enjoy one of those movies, but I keep getting sick to my stomach within the first five minutes of dialogue. Kurt hails from Southern California, and with the lack of statistics he was a rookie looking for other means of income. Is it just me, or does he look like someone asked him a complicated question, like "What's five plus three?" You have to love that mesh jersey, too.
Posted by Ryan G at 3:09 PM