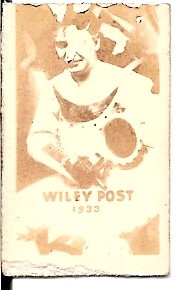 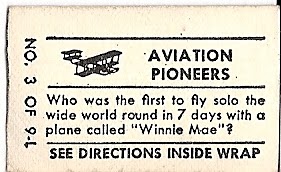 Front Design: The vertical card fronts have a black and white photo with the subject printed over the photo.

Back Design: The horizontal black and white backs indicate which "series" it was from (in this case, "Aviation Pioneers"), as well as a trivia question relating to the subject on the front of the cards. The cards are numbered as part of each series. Baseball players feature a -K card number suffix.

Parallels and Similars: 1955 and 1956 Topps Hocus Focus cards feature the same concept and similar card front designs, though the backs of each issue are unique.

Distribution: Cards were issued in packs/wrappers with instructions on how to develop the photos. The photos were originally blank, and would need to be developed by spitting on them.

Thoughts: Gross. Really gross. Totally cool, but incredibly gross. Let's hope this is one concept Topps never brings back as a retro insert set. This issue contains the first baseball cards issued by Topps - four years before the iconic 1952 set. Not only is this the first baseball issue, it's the first card issue from Topps. Well-developed near-mint cards are worth $60 (and can easily bring more), but non-sport subjects in lesser condition with poorly developed photos are thankfully easier to pick up.