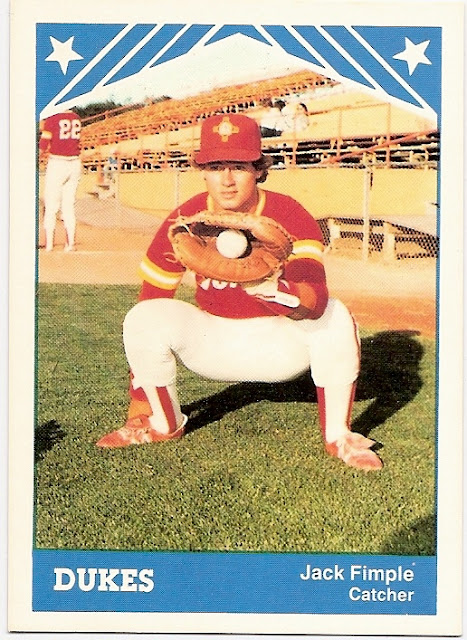 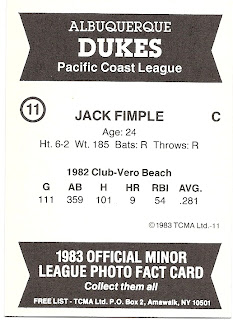 Front Design: A posed player photo is in a blue border with a mountain-like design at the top and player's team, name, and position at the bottom.

Back Design: The plain black and white backs contain the team and league names in a black banner at the top, while a similar banner at the bottom contains an advertisement for TCMA cards. The middle of the card features the player's vitals and previous-year's minor league statistics.

Parallels and Similars: All 1983 TCMA team sets are identical.

Distribution: Cards were issued through TCMA, though they could be found at dealers and stadiums. *Note: This actual card may be a reprint, possibly part of a sheet distributed with collectors kits in the mid-80s. However, the design is the same.

Thoughts: Did you know that in 1983, there were two minor league teams named the Dukes? Albuquerque was a AAA-level team for the Dodgers (Orel Hershiser is in this set); Alexandria was a single-A team for the Pirates. I've heard of multiple minor league names copied from major league franchises (the Braves do this, especially), but this is my first case of hearing of two teams playing at the same time with the same non-MLB name. It's just about as confusing as the Columbus (Ohio) Clippers and Columbus (Georgia) Catfish both existing at the same time. The Catfish moved recently.
Posted by Ryan G at 2:06 AM