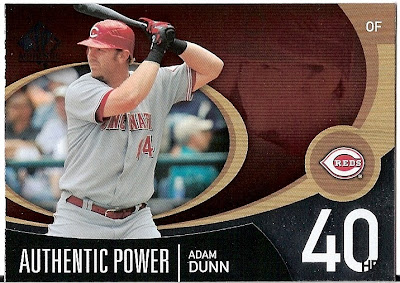 Front Design: The color player photo is placed over a double-ellipse design, with the inner ellipse containing the background and the outer ellipse containing a closeup of the photo printed in a team color. The team's logo is in a circle on the right and his power statistic is beneath it. The player's name and set name are in a box in the lower left.

Back Design: The backs repeat the ellipse design, which holds the set name, player name and team, power statistic, and a short highlight paragraph.

Parallels and Similars: There are no parallels, but a similar set called Authentic Speed was released in the same set.

Distribution: Cards were randomly inserted into 1:2 packs of 2007 SP Authentic.

Thoughts: The set is fairly attractive, and was created without parallels, relics, or autographs in mind. It's not quite my collecting style, but the cards would be nice for my player collections (Pujols, Griffey Jr, Thomas, and Chipper are all in the set). 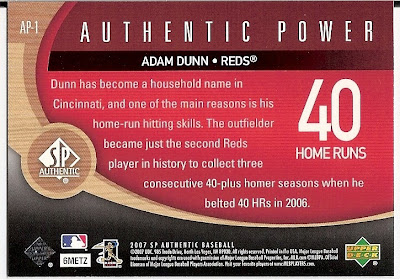