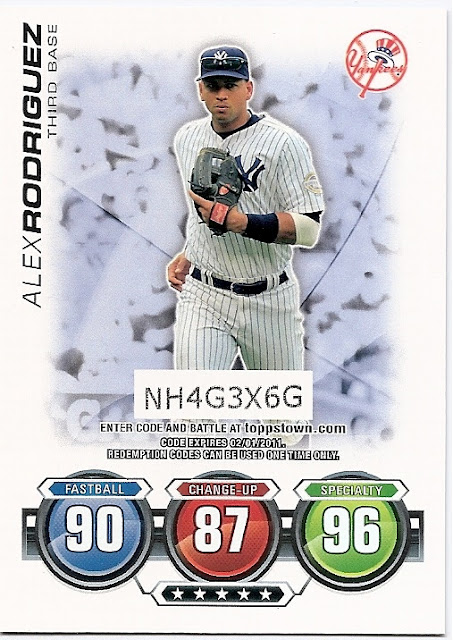 Front Design: The fronts are set up to play the Topps Attax game, with a player photo over a grayscale background, his team logo in the upper-right corner, and the player's name on the left-hand margin. The bottom of the card contains a ToppsTown code and three numbers related to the game.

Back Design: The backs are identical from player to player, with a mostly-blue deck design. The Topps Attax logo features prominently in the middle, but a giveaway as to which player might be on the front is the team logo in the lower half of the card.

Parallels and Similars: These cards are parallels of the regular Topps Attax set, with the addition of the ToppsTown code printed in the middle of the card. Each series of flagship Topps (including Update) has its own code set, and the only way of distinguishing between series is to check the code in the very bottom-right of the card back: Series 2 cards have Code #36210156. Any Topps card with a CPSIA code can be identified at the Topps Website, although it won't give you the exact set. Entering this code at the website tells you this is 2010 Topps Baseball Series 2 Reprint, but that is good enough to identify the series.

Thoughts: I'm sure these cards would be much more fun if I played the game. The 2010 issue doesn't have much pizzazz, and it doesn't feel like a game card. Instead, the Attax code set feels like an afterthought, added to packs as a filler or dummy. Unfortunately for pack openers, the card counts toward the total count.


Additional Images: card back (enlarged to show code at bottom) 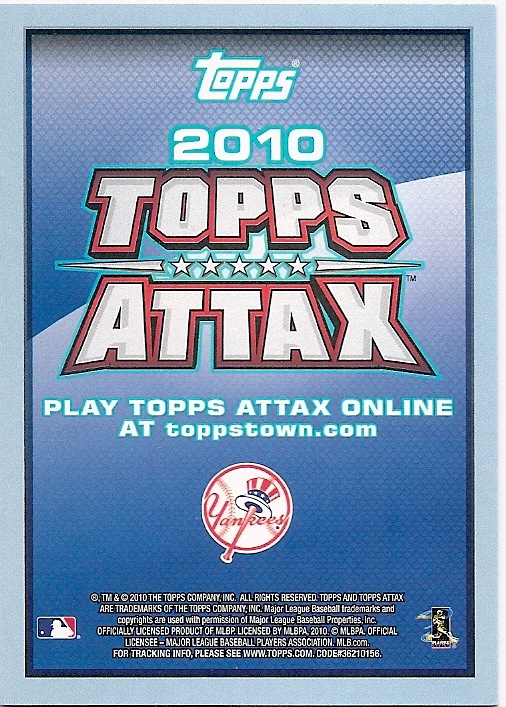