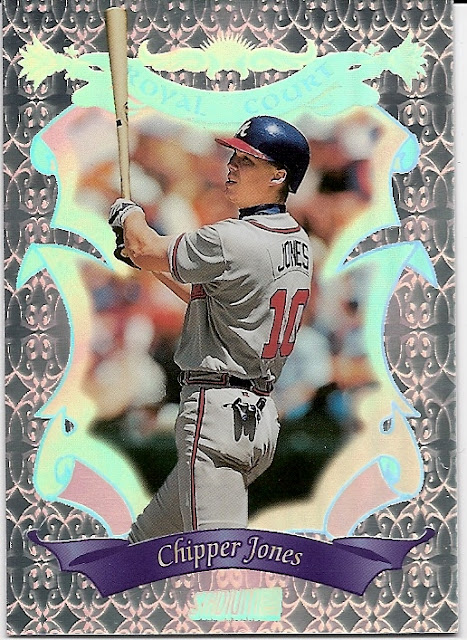 Front Design: "Uniluster" technology (whatever that is) was used to create the detailed, royal scrolling shield and border pattern surrounding a color photo. A foil banner at the top identifies the player as a member of the Royal Court, and his name is in a banner at the bottom. 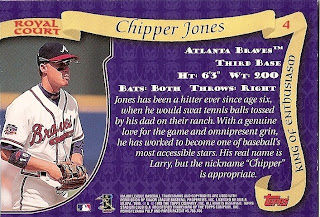 Back Design: A second color photo is on the left, and a banner across the top and right identifies the player and whether he is a "king" or "prince" of some trait. Between the photo and banner is the player's team, vitals, and a writeup related to his trait.

Distribution: Cards were inserted into most types of second series packs at a rate of 1:36, and HTA packs at 1:12. Ten of the cards feature "kings" and the remaining five cards in the set are rookie "princes." There is no distinction in print run between the two groups.

Thoughts: The foil shield or scroll that surrounds the front photo has a great shine to it, and the whole card feels like foil overload in typical Topps turn-of-the-century fashion. If you're a fan of cards with intricate foil designs, you'll love this set like I do. If you're a traditionalist who hates anything but Topps Heritage and other throwback sets, you probably stopped reading this post a long time ago. I'm somewhat disappointed that I didn't already have a card from this set, because it would have been great to add this to my Chipper Jones PC.
Posted by Ryan G at 3:00 PM