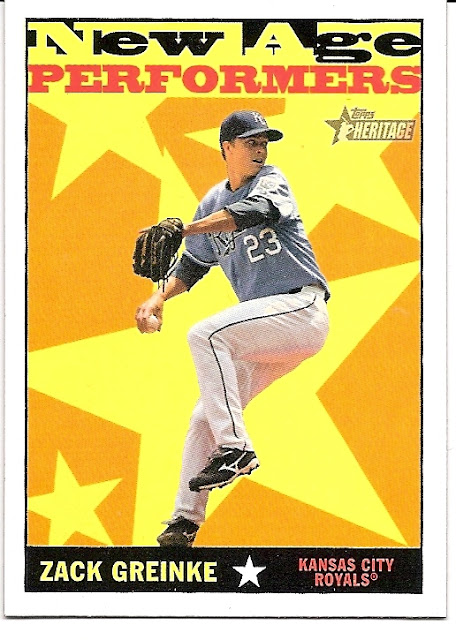 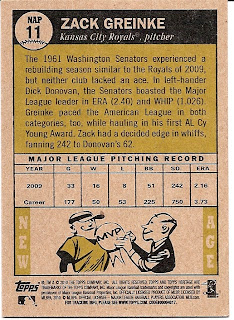 Front Design: A player's cropped image is pasted over a two-toned star background; the player's name and team appear in a black box across the bottom with another star in the center. "New Age Performers" appears across the top in black and red.

Back Design: A black box is at the top with the player's name, team, position, and the card number inside a baseball circle. A highlight biography, prior year and career statistics, and a cartoon fill the rest. The cards are printed on "throwback" style gray cardboard stock.

Distribution: Cards were randomly inserted into packs of 2010 Topps Heritage.

Thoughts: While the flagship Topps set has seen several insert changes over the past decade, New Age Performers has been an annual inclusion in Heritage since Heritage began in 2001. Like the other yearly inserts, there is nothing special beyond design and numbering to distinguish these from the base set. Since the design doesn't hold my interest, I've never collected this insert other than the single card needed for the Cardboard Zoo. For this card in particular, the biography links the 2009 Royals to the 1961 Senators and Greinke to Senators pitcher Dick Donovan. The card mentions Greinke's Cy Young Award, though the cartoon at the bottom shows the skinny-armed giant-chested player receiving a gigantic MVP button from the Monopoly guy.
Posted by Ryan G at 3:00 PM