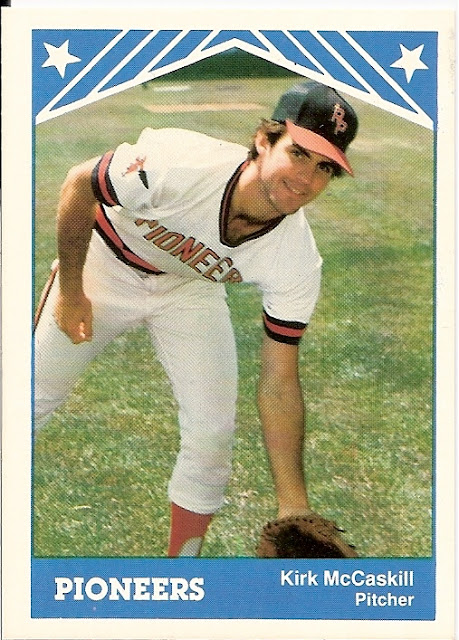 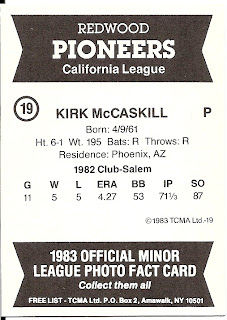 Front Design: A posed color photo is inside a blue border. The top has a converging lines design with two stars, while the bottom contains the team name, player, and position.

Back Design: The plain black and white backs contain the team name and league, player's vitals and basic minor league statistics from the prior year, and a TCMA advertisement.

Parallels and Similars: All 1983 TCMA minor league sets are identical.

Distribution: Sets were issued by TCMA, but could be found at dealers and stadiums. *Note: This actual card may be a reprint, possibly part of a sheet distributed with collectors kits in the mid-80s. However, the design is the same. (See comments below.)

Thoughts: I had never heard of the Redwood Pioneers until I owned this card, which is remarkable only because they were a member of the California League. I've been to nearly every California League stadium (Visalia Rawhide is the only remaining team), and through my travels I've learned a bit about the history of several of the teams. It turns out the Redwood Pioneers exist today as the Lake Elsinore Storm, south of Los Angeles. I visited their home earlier this year, and they have worked hard to brand themselves as a  modern, unique team that has its roots in Lake Elsinore. It isn't hard to distance yourself from history when you don't have much. They were the Santa Clara Padres for one season (1979), before becoming the Redwood Pioneers (1980-1985). Then, they moved to Palm Springs as the Angels from 1986 through 1993. The Pioneers played in Rohnert Park, California, just south of Santa Rosa. The stadium stood until 2005. The outline of the field was visible until around 2009, and it seems the small parking lot still exists (as of around 2009).
Posted by Ryan G at 4:26 PM