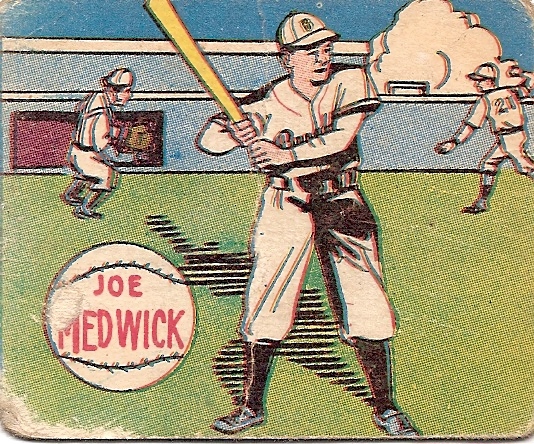 Front Design: A low-quality cartoonish drawing of the player with no borders takes up the entire front, except for a large baseball with the player's name in red ink. 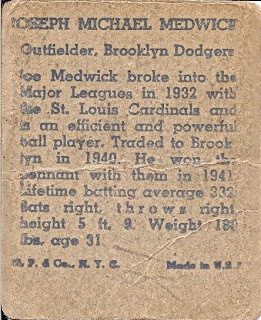 Back Design: The backs are printed in blue, with the player's full name in all caps at the top, followed by his position and team. A short career biography and vital statistics fill the bulk of the card; the bottom contains copyright information. There are variations that do not include the team, and variations in ink color.

Parallels and Similars: The similar 1949 issue contains a new checklist and card numbers on the back. The 1949 issue is also more washed out than this release. Though only six players from the 1943 set also appeared in the 1949 set, many of the images were reused.

Distribution: This is one of the few sets issued during World War II, and the first one from that era added to my collection. The cards were originally issued in strips and sold in candy stores. The strips were eight cards long (horizontally), and three strips were issued. The variations in fonts and ink colors indicate the cards were reprinted several times, possibly for several years during the war. Jimmie Foxx appears with two different teams, the trade occurring in 1942.

Thoughts: My thoughts on card sets that feature artwork should be well-known. If they aren't - I love them. These cards are very low quality - the sample image above should be shown at original size. The quality is similar to (or less than) the comics in the newspaper. But I still like this set's style. This is another issue that I hope Topps (or another manufacturer) uses in a throwback design. Granted, the paper would need to be better, the printing quality improved, and the cartoons would need to at least somewhat resemble the players mentioned in the text.
Posted by Ryan G at 3:23 PM

Email ThisBlogThis!Share to TwitterShare to FacebookShare to Pinterest
Labels: 1943, mp and co, oddball