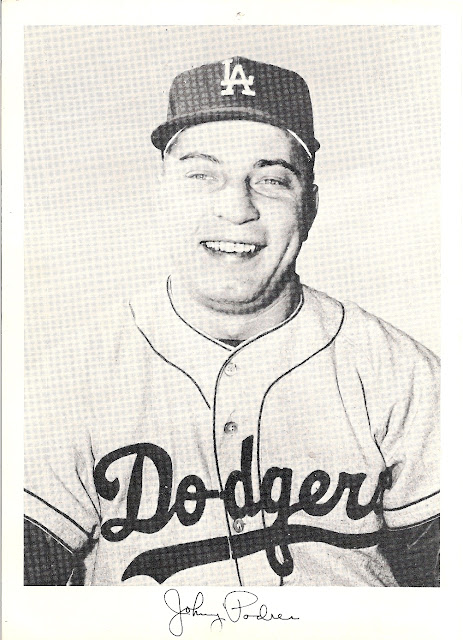 Front Design: A black and white photo appears with a white border; a player's facsimile signature appears below the photo.

Parallels and Similars: These "cards" are essentially the same as the Jay Publishing issues of the same time period, except for the facsimile signature in place of the player's name and team.

Distribution: Similar to Jay Publishing distribution, these would have been sold through mail order and at the stadium. They came as complete sets in a manila envelope that contains the year of issue.

Thoughts: I'm not sure why the Dodgers felt the need to go with a larger set of their own issue, instead of the 12-card Jay Publishing sets. The facsimile signature helped me identify this as a 1960 issue, as it appears (from the limited amount of information available) the 1958 and 1959 issues did not use signatures, and Jay Publishing sets didn't either. Other than the lack of statistics, write-up, year of issue, etc, I would love to see these issued again each year for each team. I'm guessing a licensing agreement with Topps makes it difficult or impossible for major league teams to make their own sets. Why can't major league teams carry their own team-issued sets in stadiums? (Or, why can't they carry photo packs, at least?)
Posted by Ryan G at 3:07 PM