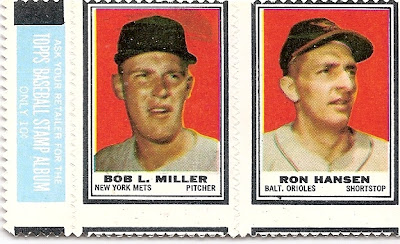 Front Design: Each stamp has a color photo on a red or yellow background. The player's name, team, and position appear over a white background beneath the photo. A black frame surrounds the picture and text. The stamps have a jagged edge.

Back Design: Being stamps, there are no backs.

Parallels and Similars: Topps has issued stamps in multiple years, though the design differs. Other companies have released stamps as well, and reprinting or copying this design wouldn't be difficult. I'm not aware of any reprints. The 2011 Topps Heritage set created new stamp panels, but those were mounted to cards. Original 1962 stamps were used in a separate set that year.

Distribution: Stamps came in panels as shown above, inserted into regular packs of 1962 Topps.

Thoughts: I enjoy products which are unique, and stamps are a departure from the usual baseball card. The design is minimal, unlike the prior year's ornate release. These are full-color though, as the 1961 stamps were drab. The stamps aren't too expensive, other than Mantle, but with a large checklist, assembling a full set poses a challenge.
Posted by Ryan G at 7:34 PM