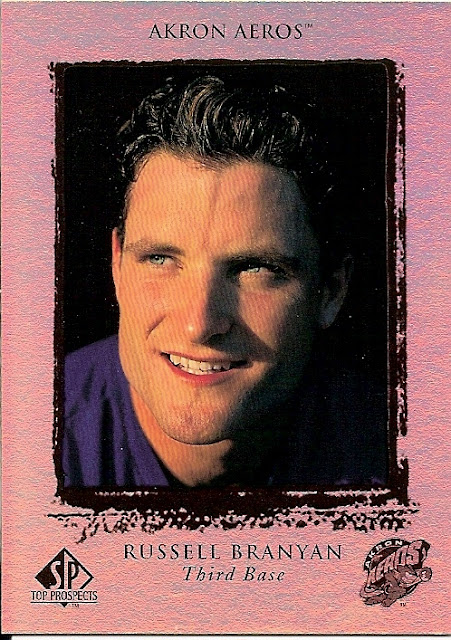 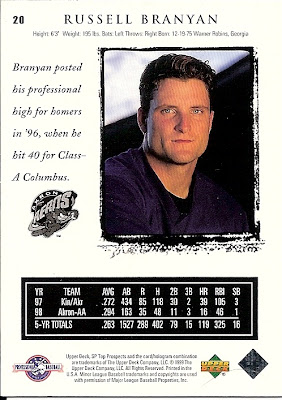 Front Design: A color photo is surrounded by a "dried marker line" border and a thick white border; the player's team name appears at the top; the SP Top Prospects logo, his name, position, and team logo appear across the bottom. The card fronts are foilboard.

Back Design: The player's name and vials appear at the top. A color portrait in a similar "dried marker" border and a short career highlight and team logo fill most of the card. The bottom of the card contains recent and career minor league stats.

Parallels and Similars: A parallel with holofoil instead of standard foil exists, called the President's Edition. These are extremely rare, serial numbered to 10.

Distribution: Cards were issued in 8-card packs for about $5. There are a few insert sets including an autograph set.

Thoughts: I could do without the foil board. It makes the card feel like a failed ancestor of 2010 Bowman Platinum. Otherwise, the design is nice and simple. The border is surprisingly attractive and unique, though there is too much white (foil?) space around the photo. Russell sure looks sexy with that slick hairstyle, though. Maybe he gave Upper Deck his modeling head shots for his card. You know, in case baseball didn't work out. The only thing I really don't like about this set is the lack of team affiliation. The Akron Aeros mean nothing to me if I don't know to whom they belong.
Posted by Ryan G at 3:08 PM