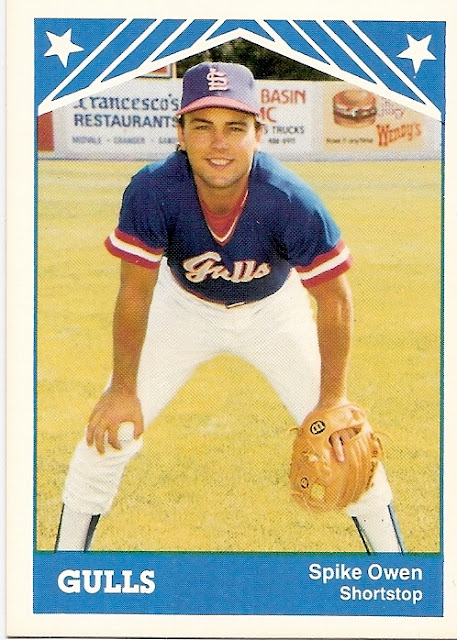 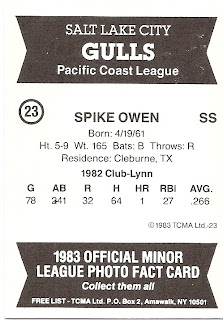 Front Design: A posed player photo is surrounded by a blue frame and white borders; a white-on-blue bottom-of-a-star style bar crosses the top while a similar bar at the bottom contains player name, team, and position.

Back Design: The black and white back has a banner at the top with the team and league names, a banner at the bottom with a TCMA advertisement, and space in the middle for player vitals and prior-year minor league stats.

Parallels and Similars: All 1983 TCMA minor league sets use an identical design.

Distribution: Cards were issued and sold by TCMA, but could be found through dealers and team stores. *Note: This actual card may be a reprint, possibly part of a sheet distributed with collectors kits in the mid-80s. However, the design is the same.

Thoughts: The Gulls were in Salt Lake City for a decade, heading from the desert heat to Calgary, Canada in 1985. The Salt Lake Bees took their place in 1994, under a series of other names. Spike Owen made his MLB debut the season this card was issued, and made his name defensively, though he was a key offensive contributor for the Red Sox in the 1986 ALCS. Spike sure seems excited to be a part of AAA on this high-school-pose photo.
Posted by Ryan G at 4:00 PM