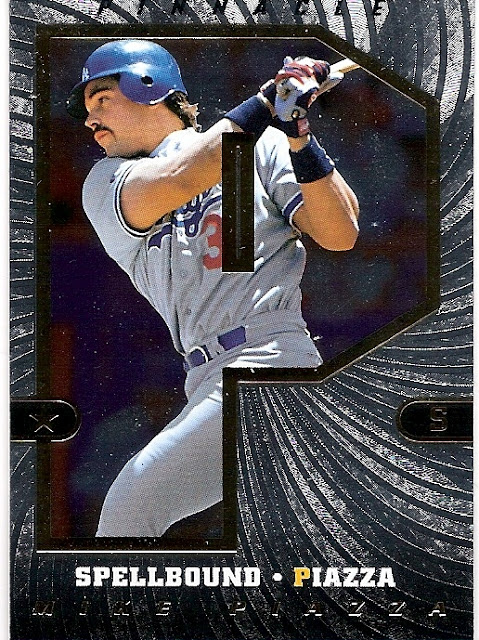 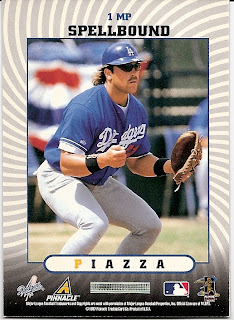 Set size: 50 cards, with each player between 4 and 7 cards

Front Design: A swirling etched-foil design from the center of the card is covered by a letter from the player's name or nickname, which is outlined in gold foil and contains a color photo of the player. The player's name is at the bottom in gold foil, beneath the name of the set and the letters for that player in white. The position of the letter on the card is highlighted in yellow. Gold foil in the middle of the vertical borders spells out the word "SPELLBOUND" when the player's cards are placed in order.

Back Design: A grey swirling background copying the front design is behind a rectangular box with a color photo; the card number and set name is above, and an oval box at the bottom of the photo identifies the location of the letter.

Parallels and Similars: There are additional Spellbound sets in future issues, including a 1997 racing set.

Thoughts: This concept would be taken several steps further in the future with the Letterman patch cards, and depending on your tastes, this version could be much better. It's less expensive, if you can locate the cards for your favorite player, though cards for players like Cal Ripken book as high as $15 each. The micro-etched foil screams late-90's insert gaudiness, and a series of these in a matted frame would look great on the wall.
Posted by Ryan G at 3:00 AM