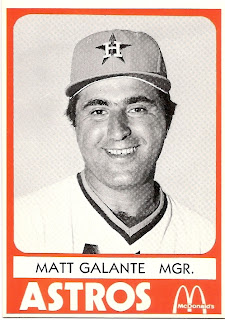 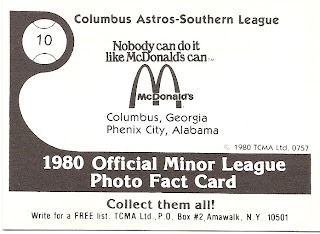 Front Design: The cards have a red border around a black and white photo. The player's name and position are in a white band beneath the photo, with the team name in white beneath that. A sponsorship logo for McDonalds is placed to the right of the team name.

Back Design: The backs use the same wavy curved-edge design as the prior year, with an advertisement for TCMA at the bottom. The rest of the card has the team and league name, as well as player's biographical data and prior year statistics, all in blue ink. The manager's card, shown, eliminates most of the information, instead placing an advertisement for McDonalds in the middle of the card.

Parallels and Similars: All 1980 TCMA cards have the same design. Some team sets used color photos instead of black and white. Note that this card is a reprint; the white border on the card front and the use of black ink on the back are giveaways. This card was reprinted by TCMA for use in a collector's kit in the mid- to late-1980s.

Distribution: Team sets were sold through the Columbus Astros, and were available through TCMA and hobby channels.

Thoughts: The Columbus Astros played in Golden Park, a historic stadium that never seemed to draw crowds. The team became the Mudcats in 1989, and in 1991 moved to North Carolina. While I never saw the Columbus Astros play, I have seen a couple games in Golden Park, when the Catfish played through the 2008 season. They moved to Bowling Green, Kentucky in 2009, and became the Hot Rods. As for the cards, they are about as plain as they can be. This is the end of my TCMA posting spree. I am so glad to be finished with this group (though I'm glad to have them in my collection) and now I can move on to more varied releases.
Posted by Ryan G at 3:00 AM