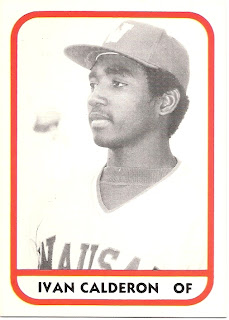 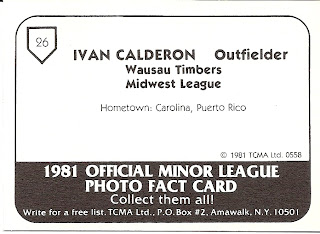 Front Design: The very basic design has a black and white photo inside a rounded red border, with a white band across the bottom containing the player's name and position in black.

Back Design: The backs duplicate the rounded border, surrounding the player's name, position, team and league names, biographical information and prior year statistics (when available). The bottom of the horizontal backs has a black band with an advertisement for TCMA cards.

Parallels and Similars: All 1981 TCMA minor league sets have the same design. Some team sets were issued with color photos; those have black borders and red printing (the opposite of this design).

Distribution: Team sets were sold by TCMA, through hobby dealers, and through the team.

Thoughts: Ivan Calderon might be the most well-known of the minor leaguers included in the collectors set this card was reprinted for. He had a respectable .272 career batting average over 10 seasons, and was an All-Star in 1991. Sadly, Calderon was murdered in 2003 in his home country.

These TCMA cards are almost done! One more tomorrow, and it's back to major league releases!
Posted by Ryan G at 3:00 AM