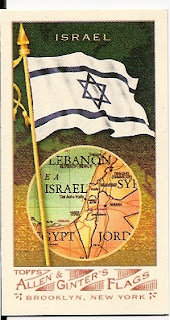 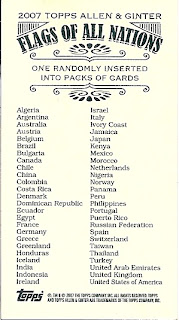 Front Design: The art for each country has a flag on a fancy pole waving over a background of a world map. An additional map of the nation and its surrounds is shown in a circle beneath the flag, similar to a magnifying glass enlarging the detail on the world map behind it. Topps Allen & Ginter's Flags, Brooklyn, New York is printed beneath the art.

Back Design: The monochromatic backs have an advertisement for the set at the top, followed by a checklist of the entire set.

Parallels and Similars: There are several tobacco-era non-sport mini sets similar to this design , of which several focused on national flags. This set should not be confused with any of those, due to the copyright information at the bottom and several other features which identify it as a modern release.

Thoughts: I enjoy the non-sport mini sets Topps puts in Allen & Ginter, even if I don't always collect the whole set. From an interest standpoint, I'd love having a set of national flags in mini card form. There's only one problem - while the set is called "Flags of All Nations" there are about 154 nations missing from the checklist. I understand there are countries in turmoil and which may not have a flag, but Iraq and Iran are missing. Neither Korea is on the list.Where is Sweden? Topps should have gone full-speed with this set and issued flags for all the countries that have one. When will Transnistria get its due?
Posted by Ryan G at 3:00 AM