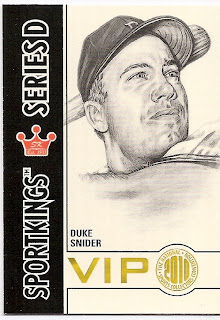 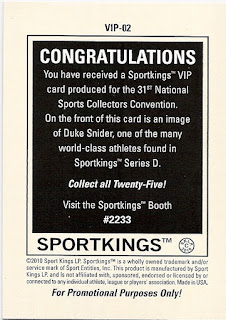 Front Design: An artistic sketch of the subject is placed in the upper left, with the Sportkings Series D logo along the right border in a black banner. The player's name is printed just beneath the sketch, followed by a gold-colored 2010 National VIP logo.

Back Design: The card number is at the top with a VIP prefix, followed by a box with a congratulatory/advertisement message, the Sportkings name, and copyright data.

Distribution: Cards were distributed at the 2010 National to visitors who purchased VIP ticket packages. Each VIP gift bag held five of the 25 promos.

Thoughts: I enjoy the pencil sketch images used in this set, and wouldn't mind a full set done in this style at some point. Perhaps when Topps brings back Gallery or Panini brings Diamond Kings back, they can do a "pencil sketch parallel" which would be the same image as the painting, done in a pencil sketch. Now that is a parallel idea. While we're at it, they could get those caricature artists from amusement parks to do goofy sketches too for a third parallel. I'm sure there are tons of art students who'd love to do this for cheap and turn out some relatively good work.  As far as a set issued only for the purpose of distribution at the National, this is a pretty decent one. Since Sportkings didn't just take cards from their sets and foil stamp them and call them National Exclusives, this set has its own importance (ahem, Panini/Donruss).
Posted by Ryan G at 3:00 AM