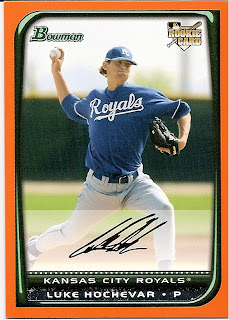 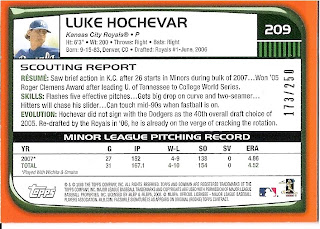 Front Design: A black frame with green or red highlights (depending on if the player is a rookie or veteran, respectively) surrounds the color player photo. A facsimile autograph is placed in a semitransparent box at the bottom of the photo, and the player's name, team, and position are beneath the photo in the frame. The frame itself is curved in the upper left and lower right corners. The card borders are orange. Note that some cards in the set are autographed.

Back Design: The curved-edge frame and coloring is repeated on the back. A small player photo is at the top next to his name and biographical details. This is followed by a scouting report (for rookies) or "Bowman Briefing" (same information, for veterans). Prior-year and career statistics are at the bottom; rookies have minor league statistics while veteran cards contain major league stats.

Parallels and Similars: This set is a parallel of the 2008 Bowman set. Other parallels for this issue are Blue, Gold, Red, and the four printing plates. There are also twelve Bowman Chrome sets including parallels and plates, but the card numbering differs.

Thoughts: Orange is such a 1990s color for baseball cards, but if there's one thing that I enjoy with Bowman parallels, it's the rainbow of borders. The 2008 Bowman design isn't bad, except for the nameplate on the front. The font choice and perforation line just look odd on the card.
Posted by Ryan G at 10:35 AM