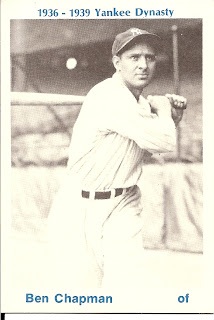 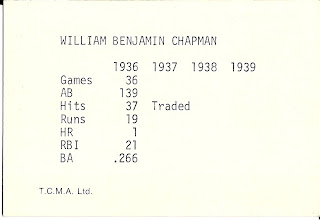 Back Design: The backs are printed in black and appear to have been typed on a sheet of paper before being sent to press. They contain the player's full name and statistics from 1936-39. A very simple copyright line at the bottom identifies the set as being issued by TCMA.

Parallels and Similars: A reprinted and (slightly) extended version was released in 1983, with blue ink on the back instead of black.

Distribution: TCMA sold sets directly to collectors, as well as dealers and other hobby sources.

Thoughts: I really wish TCMA would have put a little more effort into the design of their cards in the 1970s, as they issued several topical sets that would be interesting to niche collectors. Instead, the set has only a photo and basic statistics, without even any insight on how the player factored into the dynasty. It's my thought that a topical set should tell a story or at least have each subject related back to the main theme. That said, many players from this set have only a handful of affordable cards, so issues like this bring historical players to modern times (at least, back in the 1970s).
Posted by Ryan G at 3:00 AM