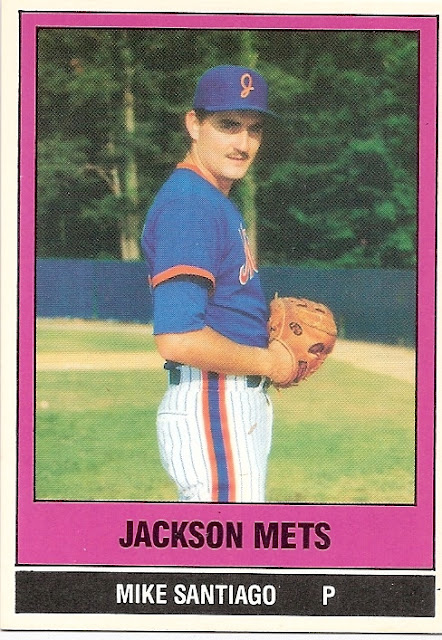 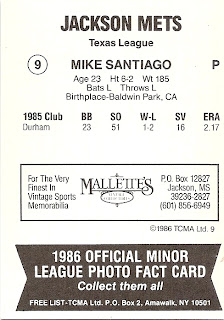 Front Design: The fuchsia border surrounds a color photo of the player, with his team name beneath the photo in the border. A black band at the bottom of the card holds the player's name and position.

Back Design: The plain backs have the team and league names, followed by the player's name, jersey number, and position. Vitals and prior year statistics follow. A sponsorship for Mallette's, a sports card shop, is in the middle, with a TCMA advertisement in a banner at the bottom of the card.

Parallels and Similars: All 1986 TCMA minor league team sets have this design.

Distribution: Cards were sold through team stores, hobby means, and TCMA. I'm sure Mallette's got a nice handful for sponsoring the team.

Thoughts: This authorized reprint meant for inclusion with a collectors kit seems to differ only by the banner at the bottom of the card back: this banner is black and white, while I think banners on original cards have a green tint. Thankfully, this is the last of my 1986 TCMAs for a while, but I have some late-70s/early-80s to wrap up over the next week. Mike Santiago is the only player in the group of 1986 cards that doesn't seem to have made the majors, despite having an acceptable record. In fact, he never got past AA Jackson, despite having a 1.86 record in 1987 as a reliever.
Posted by Ryan G at 3:00 AM