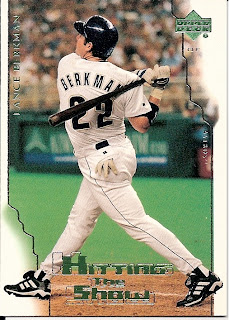 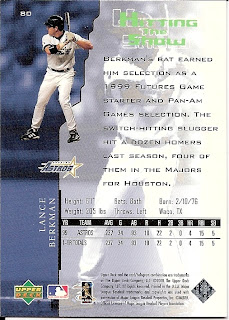 Front Design: Half the set is composed of subsets, so it's difficult to identify a card simply. There is no notation that this subset is part of "Hitter's Club" either. Regular cards contain a busy design of horizontal lines, with the text "Hitter's Club" in foil towards the bottom of the card. The player's name and team also appear at the bottom, with the position in an upper corner in silver foil, and his batting average in foil in the middle-left of the card. This Hitting The Show subset card uses green foil, with the subset name at the bottom. Jagged corners make it look like the photo is "breaking." The player's name is in the upper-left corner in green foil, and the Upper Deck logo is in the upper-right corner with the same green foil.

Back Design: Regular Hitter's Club backs copy the bottom design to the bottom back of the card, with statistics, vitals, and a short biography over a background photo. This subset contains a photo in the upper left, used again as a background image behind a short biography, vitals, and statistics. Note that Hitting the Show is a rookie-oriented subset, and the other major subset, Why 3K?,  features players in the 3000-hit club.

Parallels and Similars: There are no parallels in this issue, and I don't believe Upper Deck issued this set again.

Distribution: This was a retail-only issue, with 5 cards in a $2.99 pack. There were six insert sets, an autograph set with an impressive checklist, and A Piece Of History series relic cards randomly inserted.

Thoughts: This is one of many forgettable sets Upper Deck issued around the turn of the century. The design is just plain ugly, though I get the idea - feature some of the best hitters in the game in their own 90-card set. The green foil is somewhat amusing, though, since you don't see it used on cards too often.
Posted by Ryan G at 3:00 AM