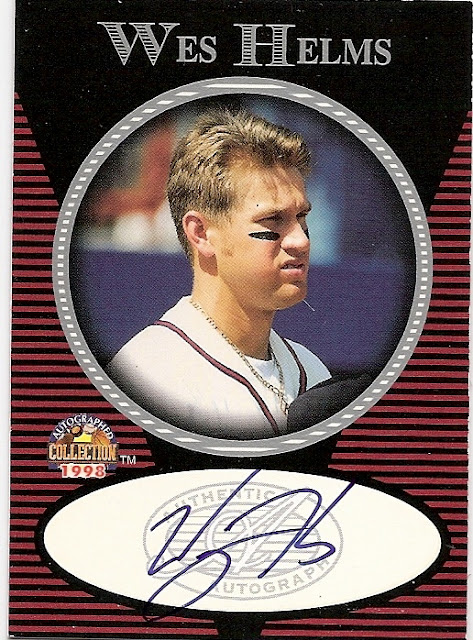 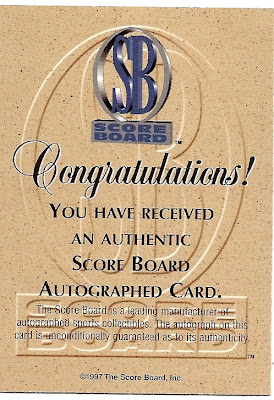 Front Design: The player's photo appears in a gray circle with white horizontal stripes. The card's background contains black and red stripes, with a black V running the vertical length of the card. The player's name is at the top in grey letters. An on-card autograph is on a white oval beneath the photo, with a Score Board authentic autograph watermark. A set-identifying logo carries a 1998 issue date.

Distribution: Cards were inserted 2:9 packs of Score Board Autographed Collection.

Thoughts: For an unlicensed issue, this is a fairly nice autographed card set. The autograph is on-card, and the design is bold but not overwhelming, unless seeing lots of horizontal lines remind you of the blinds in your grandmother's house, which smelled like old people and had so many nice things that you weren't allowed to run around and play like you were at home. And what was up with all those little trinket boxes on the coffee table with random buttons and other found objects? Don't those objects have a home? Kerry Wood is the only name I recognize in this set, other than Helms, and Woods wasn't inserted into packs. Helms played for the Marlins through the 2011 season, but has probably seen his last MLB pitch. By the way, I haven't posted in a few days because I've been busy with my Japan preparations.
Posted by Ryan G at 3:00 AM

Email ThisBlogThis!Share to TwitterShare to FacebookShare to Pinterest
Labels: 1997, 1998, autograph, inserts, score board