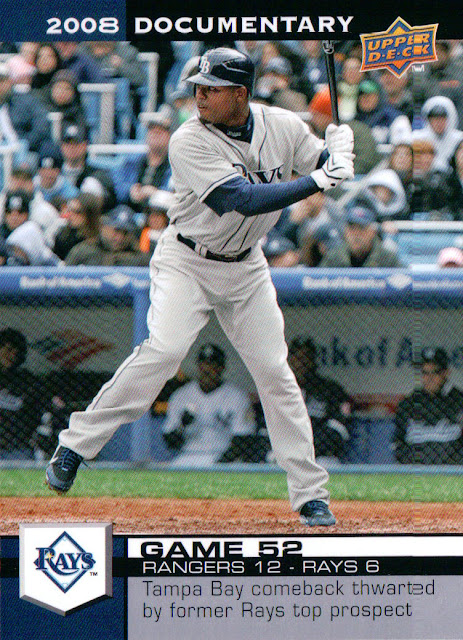 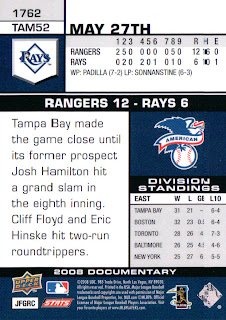 Design Notes: After a black border at the top identifying the set, a photo of a player from the team fills most of the card. The bottom border of the card has a team logo, game number, score, and a headline. Backs give the line score, a short game summary, and league standings on that day.

Parallels and Similars: Gold parallels were issued with the original release, but not for the post-season cards.

Distribution: Cards were sold in packs of 15, with boxes holding 24 packs. Post-season cards were randomly inserted into packs of 2009 Upper Deck Series One at a rate of 1:4.

Thoughts: The set was a good attempt at truly documenting the 2008 season on cardboard. To put together the nearly-5000 card set in its entirety would be insanity - has anybody tried? I know some people are collecting "team" sets, and the cards are nicely numbered for the team in addition to the entire set. The big problem most people have with the set is that the photos don't always come from the game shown on the card - and sometimes the photo is of a player who wasn't even in the game. I would have liked to see a full box score on the back instead of just a line score, but at that point I'm just being picky. There are two cards for every game - one for each team. I applaud Upper Deck's efforts but I wish they had put a little more effort into the execution.
Posted by Ryan G at 3:00 PM