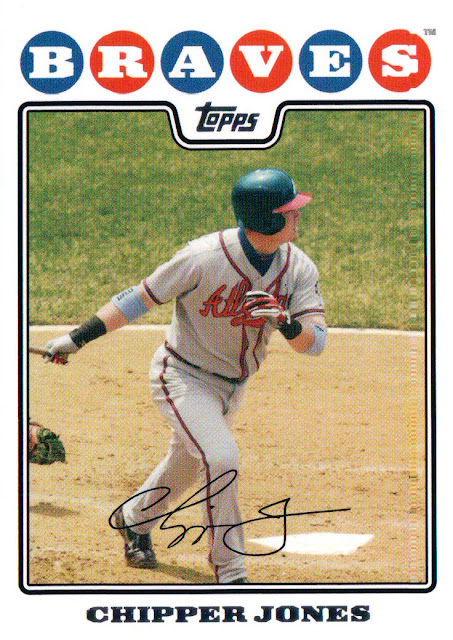 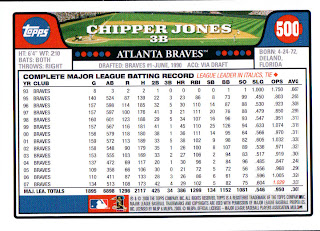 Design Notes: The team name is across the top border, each letter placed in alternating team colors. The photo is in the middle, and the player's name is in the bottom border printed in silver foil. Backs are fairly standard, with biographical information and career statistics. A short highlight is mentioned when space is available.

Distribution: Cards were sold in retail and hobby packs of 11 cards each, with 36 cards per box. HTA Jumbos contained 46 cards each and came 10 packs per box. Other packaging methods were used including blaster boxes and, later, complete sets.

Thoughts: The design is quite plain and the team name at the top takes up a large portion of the card space. The alternating colors can make the team name a little difficult to read, as well. It's not a horrible design, and has a nice retro feel, but it's just a couple steps away from being good. More color use (perhaps team color borders and team font use at the top) and movement/elimination of the Topps tab at the top (just overlay the Topps logo in an unobtrusive corner of the photo).
Posted by Ryan G at 3:00 PM

Email ThisBlogThis!Share to TwitterShare to FacebookShare to Pinterest
Labels: 2008, topps