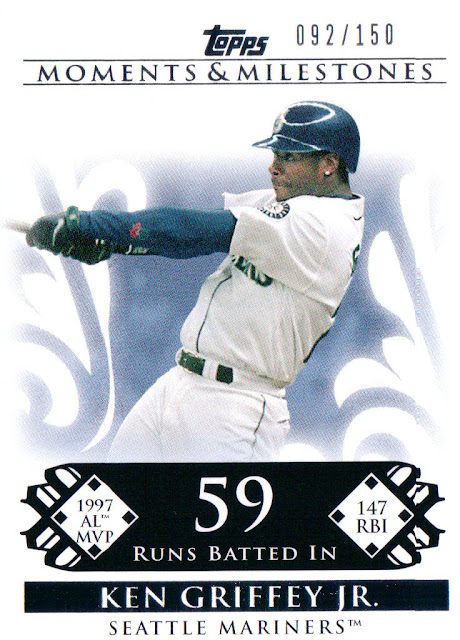 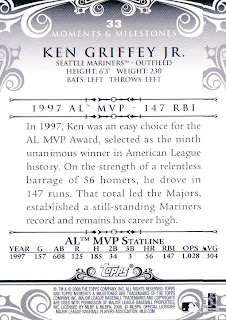 Design Notes: Similar to 2008 Topps Co-Signers, the cards have a lack of color in the design; the background consists of gray french curves. The set name and a serial number is on the top, with the player's name and team name at the very bottom in foil. Also at the bottom is a selected statistic for the player. The total number of that statistic is in the right-side diamond (in the Griffey card above, 147 RBI). This set is "mirrored" such that everything is identical except for the large number in the middle, which exists as sequential variations up to the total number. For example, there are 147 variations of this Griffey card, with the only difference being the number in the center of the card (59 on my copy). Backs contain a paragraph highlighting the statistic and some statistics from the year or event featured on the card.

Parallels and Similars: Each base card appears in multiple versions; a handful of cards have only one version (all the rookie cards #145-189 have only one version as well), while Alex Rodriguez #1 and Frank Thomas #3 both have over 500 versions. Most collectors only want one copy with the version not making a difference. Parallels for all the versions exist in black, blue, and red, plus four printing plate colors.

Distribution: 18 packs per box, with six cards per pack.

Thoughts: With 12,569 cards in a master set, I wonder if anyone has attempted to build a complete monster set. Most collectors aren't interested in all the variations, with almost the entire checklist having over 30 variations per card. I like this set better than Co-Signers, but unless I find an awesome deal on a major collection of these to begin a master set, I have no interest in it. For my collections where I need player cards (such as my collection of award winners), this set looks very nice and fits well.
Posted by Ryan G at 3:00 PM