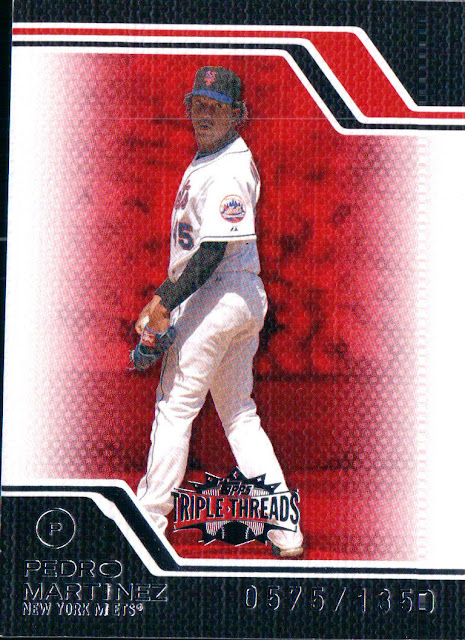 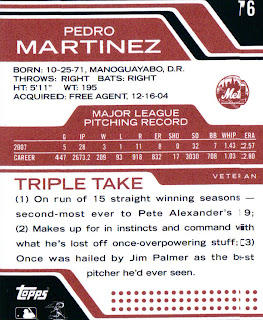 Design Notes: The player's photo appears over a monochromatic background; a plateau-shaped border at the top and bottom frame the image. His name, position, and team name are all in the bottom right corner, and a large serial number is in the bottom-right. The fronts have a matte finish. Backs carry over the colors from the front to provide biographical information, prior-year and career stats, and three highlight sentences in "Triple Take".

Distribution: Six cards appear in every pack, with two packs per box. Three of the six cards in each pack are base cards (serial numbered to 1350); the remainder are parallels plus a triple relic card.

Thoughts: Read the Triple Take on the back of Pedro Martinez's card. It basically says he's lost his power and is now getting by on tricks alone. And that is basically what Triple Threads is - a big trick. For just over $100, you get five cards that were designed in five minutes, plus a card with three plain pieces of jersey (and possibly an autograph). Granted, that might be a super-low numbered Babe Ruth bat card. Then again, maybe you have Elijah Dukes, numbered out of 99. If there ever was a product designed for high-rolling case breakers, Triple Threads is it. And there's just too much pale red on this card.
Posted by Ryan G at 3:00 PM