1998 Pinnacle Performers Swing for the Fences 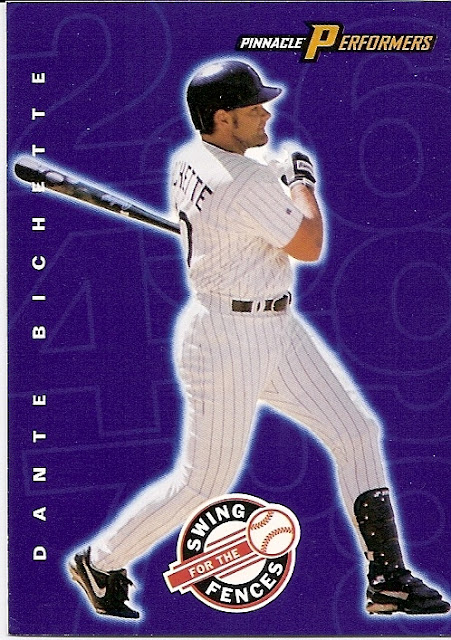 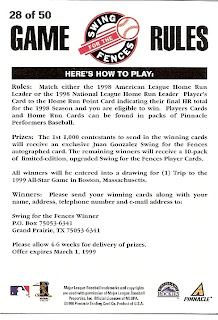 Front Design: The front of the card contains a background with several lightly-shaded numbers, over which his cut-out photo appears. His name runs up the left side, the Pinnacle Performers logo is at the top, and the Swing for the Fences logo is at the bottom.

Back Design: The back has a card number in the upper-left and the game rules.

Parallels and Similars: No similar cards, though a similar contest was run the prior year in Pinnacle products. There are home run point cards that go along with this contest.

Distribution: These player cards were inserted 1:2 packs of Pinnacle Performers.

Thoughts: There were no winners in this contest, as Pinnacle went bankrupt before redemptions could occur. The exchange card would have provided the recipient with an autographed Juan Gonzalez baseball. None of the upgraded cards were released. As for the contest, there were similar programs done in the 1990s (including the Crash The Game contests run through Upper Deck's Collector's Choice line). It would be fun to see Topps do a contest like this instead of simple wrapper redemption programs.
Posted by Ryan G at 3:00 AM