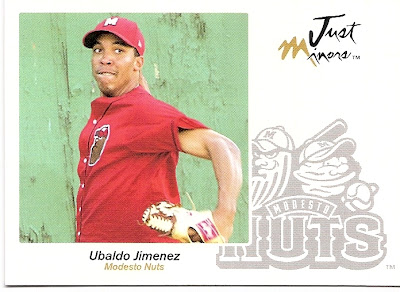 Front Design: A color photo is placed on the left side of the horizontal-format card, beneath which is the player's name and team. The right side of the card has the Just Minors logo and the team's logo in grey. 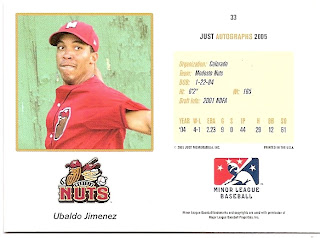 Back Design: A cropped version of the front photo is in a gold frame in the upper left, and the color team logo and player's name is beneath. Biographical and prior-year statistics are on the right.

Distribution: Cards were sold in pack form - four cards per pack including one autograph, and twelve packs per box.

Thoughts: As with other Just Minors products, the focus is on the autographs, so the card design here leaves plenty of room to put the autograph sticker with not much effort put into the design. In fact, it follows some of the same basic principles as another recent set featured here: 2004 Justifiable. It's not surprising that Just Minors has moved away from trading cards to releasing autographed and game-used full memorabilia items. To see an autographed version of this card, see this post.
Posted by Ryan G at 3:00 AM