1996 Team Out! Game - Piazza and Matt Williams on the same team? 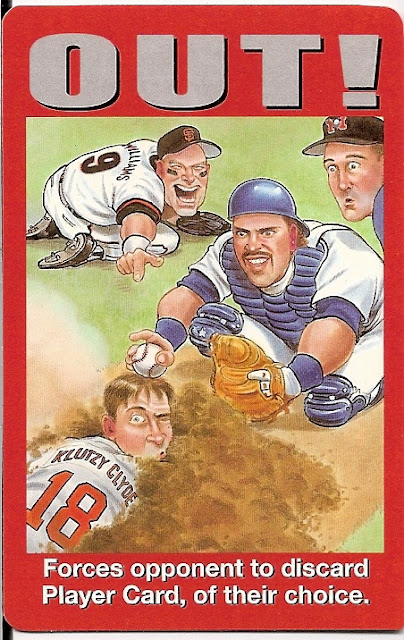 Front Design: Cards are designed like other game or playing cards, with rounded edges. Action cards have red or blue edges, while player cards have black edges. Real MLB player personalities are used in the action cards (see Mike Piazza and Matt Williams somehow both playing in the field at the same time, in different jerseys). Color photos are used for the actual players, with the position at the top and bottom of the card, and the player's name and team at the bottom of the photo. 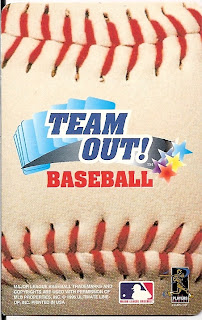 Back Design: The unnumbered cards have a baseball sweet spot background, with the Team Out! logo in the middle and copyright information along the bottom. Backs are all identical, as with other game and playing card sets.

Distribution: Sold as a boxed set, containing 37 of 91 player cards and 23 of 10 action cards. This means action cards were printed in much greater quantities than the player cards (if my math is correct, approximately six times greater).

Thoughts: I like the goofy cartoon above. Matt Williams finds it incredibly hilarious that Clyde is out. Piazza looks creepy, but with the mullet, he looked like creepy trailer trash most of the time anyway. I wonder if they're playing at some Team Out! All Star Game, as there's no other way Williams and Piazza would be on the field together in different NL uniforms at the same time. The card game must have never caught on, as I don't think there was a second edition issued. I would like to have a set of action cards for my art collection, though. Don't buy your singles from eBay unless you're desperate. While the full set books for $40, the highest singles are listed at $3, and honestly, most can be had for a quarter at a card show if you come across one (eBay prices are, as usual, much higher than book).
Posted by Ryan G at 3:00 AM

Email ThisBlogThis!Share to TwitterShare to FacebookShare to Pinterest
Labels: 1996, game, oddball, team out