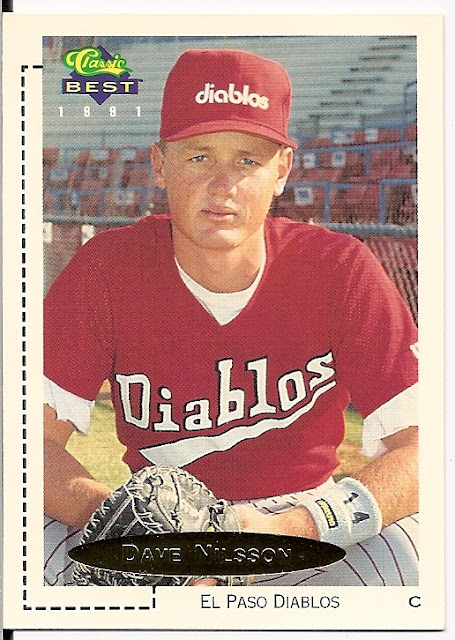 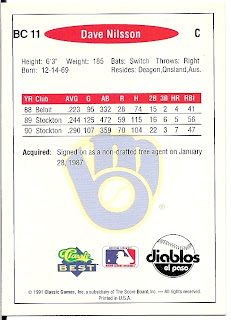 Front Design: The white-bordered cards have a dashed line leading from the Classic/Best logo in the upper left corner to the player's name, in gold foil at the bottom. In the bottom border is the team name and player's position.

Back Design: The backs have a thin black frame and the player's major league affiliate logo as a background. The top row has the card number (BC prefix), the player's name in a red oval, and position. Following are the player's biographical stats, prior professional statistics, and information on how the player was acquired. The bottom of the vertical cards have the Classic/Best logo, MLB logo, and minor league team logo.

Parallels and Similars: This set is in the same design as the regular 1991 Classic/Best set.

Distribution: Cards were inserted one per jumbo pack of the Classic/Best minor league full set.

Thoughts: In 1991, only a few sets had gold foil: Stadium Club was the first major issue full set, and the Desert Storm parallel of Topps' flagship issue had a gold foil stamp. 1991 Leaf had an insert with gold foil, and a few of the 1991 Bowman cards had a small gold foil stamp. So this set ranks up there with some of the more "innovative" issues of the year. There are some players in the set that became successful at the major league level, including Ivan Rodriguez, Jim Thome, and Arthur Rhodes. Mike Schmidt, hardly a minor leaguer, is card number 1 in the set.
Posted by Ryan G at 3:00 AM