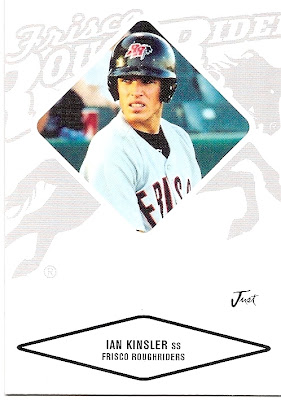 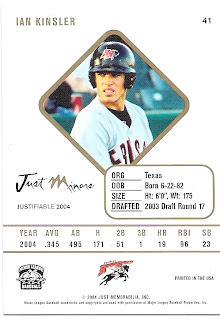 Front Design: A diamond-shaped player photo with a white border sits over a light-black (wouldn't that be grey?) team logo. The bottom of the card has the Just logo, followed by the player's name, position, and team in a wide black-bordered diamond.

Back Design: The front photo and diamond crop is repeated on the back with a gold border; the player's name is in the upper left and card number in the upper right. Just beneath the photo is his biographical information and the only notation as to the set, followed by prior minor league statistics.

Parallels and Similars: There are three colored parallels, four printing plates, and four autograph parallels to this base set.

Distribution: Each set-box of Justifiable included one complete set, while foil packs were also distributed.

Thoughts: The Just Minors products focus on autographs of minor league players, so there isn't too much effort put into base set design, as you can tell. There's plenty of room on the front for the autograph sticker, and space on the back for serial numbering. Like most Donruss issues of 2004-2005, the set is an afterthought to the autograph checklist.
Posted by Ryan G at 3:00 AM