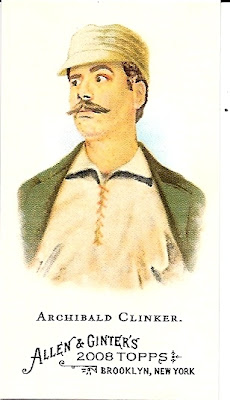 Front Design: The fronts look the same as the 2008 Allen & Giner set, with a painting of a fictional member of Team Orange, followed by old-timey text of the "player's" name and the Allen & Ginter 2008 logo. 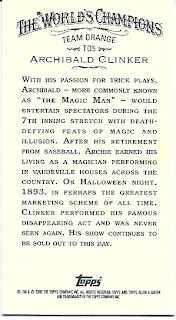 Back Design: "The World Champion"s and "Team Orange" are across the top, followed by the player's name. A paragraph describing the player's abilities follows.

Parallels and Similars: As mentioned, this set is based on the 2008 Allen & Ginter set. It can be distinguished easily by the "Team Orange" text across the top of the back, and the prefix "TO" before the card number.

Distribution: The cards were one of the "rare" inserts in 2008 Allen & Ginter, inserted one card for every six boxes.

Thoughts: Many people don't like the gimmicks and non-sport subjects in Allen & Ginter, and for them there are other throwback sets or just the base set (though that includes plenty of non-baseball subjects). I like fun sets like these, showing a bit of creativity from the Topps design team. Many of the fictional characters portrayed in Topps sets (this set, and Gypsy Queen's Gypsy Queen insert set are good examples) are based on actual Topps employees. See this post for details. I would love to have a full set of Team Orange cards, but given their rarity (and thus premium), it seems to be a bit too much to take on.
Posted by Ryan G at 3:00 AM