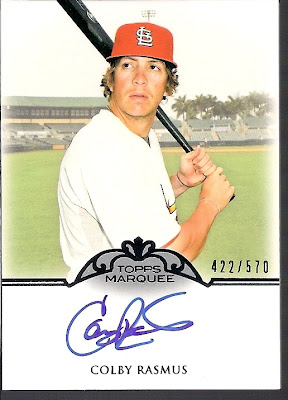 Front Design: A player photo, usually a portrait, is overlaid with foil across the bottom. The lower portion of the card has an on-card autograph of the player represented, followed by his name. The cards are serial numbered in the lower-right portion of the photo. 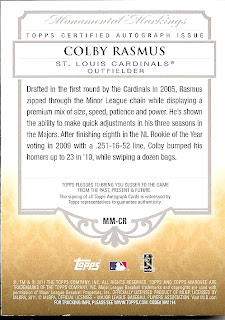 Back Design: The backs have a grey frame. A box at the top has the player's name, team, and position, which is followed by a short biography. An authenticity guarantee follows. At the bottom of the grey frame is the card number, and beneath the frame is a tan/gold fancy victorian design.

Distribution: Cards were randomly inserted into boxes/packs of Topps Marquee. The Monumental Markings set appears about one per box. The serial numbering for any specific player depends on that player's popularity (and thus cost for obtaining signatures) - superstars like Sandy Koufax signed only 10 cards, and many of the "common" players signed up to 600 copies.

Thoughts: This set was forgotten soon after its release due to another high-end issue arriving within a couple weeks. It's my favorite high-end set of the year. I could never afford Triple Threads or Tribute, and this set provides cards that are just as attractive at a better price point. Plus, all the autographs here should be on-card, which is important for today's collectors.
Posted by Ryan G at 3:00 AM