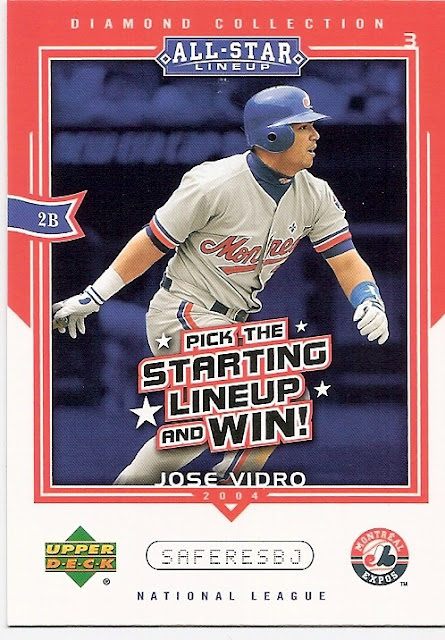 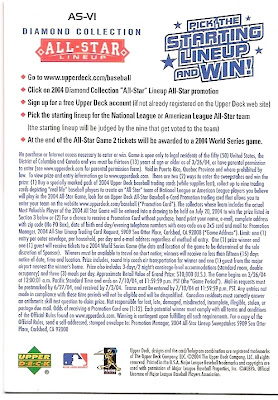 Front Design: A player action shot is placed inside a quadruple-matte frame of red and white, with his name at the bottom of the photo and "pick the starting lineup and win!" near the bottom. His position is in a blue flag at the left, and a code for entering the contest is beneath the photo in an oval box.

Back Design: The back has all the details for entering the contest, which involved picking the All-Star team starting lineup. The winner would win tickets to a 2004 World Series game.

Parallels and Similars: There is an e-card version which I believe would have allowed the lucky holder to instantly win a prize.

Distribution: While called "promo" cards, these didn't promote Upper Deck's Diamond Collection All-Star set, as they were inserted into packs of that product. There was also a Diamond Collection "Pro Sigs" issue released in 2004.

Thoughts: For a flimsy game card tossed into packs of Diamond All-Star, the design isn't too bad. Featuring different players on the front make these somewhat collectible in their own right. If only these cards had that red border around the photo done as a die-cut paper frame (similar to Gypsy Queen). Then they would be really cool!
Posted by Ryan G at 3:00 AM